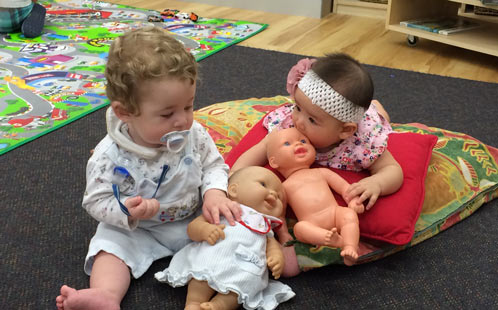 New research from the University of Western Sydney shows baby boys prefer objects with faces over machines, challenging the theory of an innate preference among babies for 'girly' or 'macho' toys.

Researchers from the MARCS Institute Babylab at the University of Western Sydney gauged the preferences of four and five month old babies by showing them pictures of male and female humans and dolls, as well as cars and stoves.

Researchers then measured how long their gaze lingered on the objects, and calculated their preferences based on how long they were fixated upon each image.

The study, published in the Journal of Experimental Child Psychology, found that like baby girls, baby boys were more willing to engage with dolls than cars.

"As surprising as it may sound, although the thing to do is to buy dolls for girls and cars for boys, the science suggests boys actually prefer dolls," says the leader of the study Dr Paola Escudero, from the UWS MARCS Institute.

"Everyone loves buying dolls for baby girls and cars and trucks for baby boys, it's simply what we do."

"However, using state-of-the-art eye-tracking technology, we found that these gender-specific preferences are not present at five months, indicating that they are the result of physiological changes (e.g. their hormone levels), cognitive development or social pressure."

While Dr Escudero's research provides new scientific evidence for baby boys' natural connection to dolls, the debate about what causes the gender switch to be thrown in older children is still hotly contested.

"More research is needed to fill in the gap between five months and three years to determine if it's nature or nurture that triggers little boys' interest in toy cars and trucks and other stereotypically male-associated toys," she says.