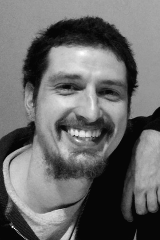 Jack Tsonis studied at Macquarie University, obtaining a Bachelor of Ancient History (Hons) in 2008 and a PhD in 2013. His dissertation combined perspectives from postcolonial theory, global history, evolutionary studies, sociology, science and technology studies, and the academic study of religion. For a while, he planned to turn his PhD into a book: namely a critical analysis of Western theories of social evolution from 1500 to the twenty-first century, with a particular focus on the contemporary "Axial Age" narrative of religious history. This plan is still in the dream queue.

In 2015, Jack's career (indeed his whole life) took a sudden change of direction, and he began devoting his life to sauna. Having owned a sauna since 2010, Jack had become firmly convinced of the physical, mental, and social benefits of sauna. Already frustrated with the lack of available sauna in Australia, it had also become apparent that virtually no academic research exists on this global phenomenon.

After further investigation, Jack resolved to create two entities. The first is ASBA, the Australian Sweat Bathing Association (est. 2016), a non-for-profit organisation designed to address the lack of sauna culture in Australia and to promote the practice more widely. ASBA has already become Australia's representative in the International Sauna Association (est. 1956), and is currently seeking Foundation Members until April 2018. ASBA's motto is "Promoting Happy and Healthy Communities". For more information, please visit www.asbasweat.org (opens in a new window)

But this would not solve the world's lack of published sauna research, so Jack has also begun to create The International Journal of Sauna Studies, an interdisciplinary journal covering health science, history & culture, and technology & design. Working with collaborators from the University of Eastern Finland, the first volume of the IJSS is slated for publication after the XVII International Sauna Congress in Sweden, June 2018. To lodge expressions of interest in the journal, please visit www.saunaresearch.org

Jack began teaching at Western Sydney in 2013, tutoring 8 subjects across History, Sociology, and Psychology. In June 2015, Jack joined the Graduate Research School to teach research methods in the new Master of Research (MRes) program. He is dedicated to high quality learning and teaching, and makes every effort to foster a trusting and collaborative environment with students.

Jack's proudest non-academic achievement is breaking the Guinness World Record for the World's Longest Handshake in 2009.