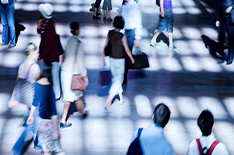 Religion and Society Research Cluster resides within the School of Social Sciences.

Religion and Society Research Cluster is an expansion of the Study of Contemporary Muslim Societies (CSCMS) established in 2009 at Western Sydney University under the umbrella of the National Centre of Excellence for Islamic Studies.(opens in a new window)

Whereas the focus of the CSCMS was mainly on the study of Muslim communities and how they develop, interact with and adapt to secular societies, Religion and Society Research Cluster extends and deepens this scope in order to explore  the richness and diversity of religious traditions and communities both nationally and globally. In addition to consolidating the University's growing research strengths in the social scientific study of religion, the expanded group aims to work with a wider range of academics from a variety of disciplinary fields such as religious studies, history, law, anthropology and philosophy.

In addition to these research activities, Religion and Society Research Cluster also contributes to postgraduate teaching and research in the University with the aim of building a distinctive group of young scholars working broadly within the social sciences and humanities on research topics relating to religion, multiculturalism and post-secularism.