Dr Elisabeth Janu, together with graduate colleagues and academic staff from the School of Medicine, Centre for Health Research and the Royal Brisbane Children's Hospital and Queensland Children's Medical Research Institute, have published research in a recent Medical Journal of Australia article. Synopsis: Dr Joanne Lind is an early career academic in the field of medical genetics; training our future doctors to integrate the sciences with clinical reasoning. She has designed and implemented the genetics curriculum within the medical school at the Western Sydney University using a variety of teaching delivery strategies, including interactive lectures and online modules, to transition students from rote to constructivist learning in a problem-based course. Joanne links the processes at the cellular level to disease, connecting the dots between science and medicine, and draws on her own experiences as a researcher in the field of genetics, reinforcing that knowledge learned from the foundational sciences is critical in the advancement of medicine.

Researchers from the School of Medicine were recently successful in being awarded competitive funding from the National Health and Medical Research Council. We congratulate Professor Jens Coorssen, Dr Vita Birzniece, and Professor Louisa Jorm & Ms Deborah Randall from the Centre for Health Research. Other staff were successful as investigators on grants held by other institutions.

Access the headline link for more information about each of the projects in more detail.

Investigating the anti-inflammatory properties of foods

Professor of Pharmacology from the School of Medicine, Gerald Muench's research was recently presented in a story on the ABC Science website. It examines specific properties in different foods and is part of a wider research program into the role of healthy nutrition in delaying the onset of Alzheimer's.

Dr Slade Jensen, Senior Lecturer in Microbiology and Infectious Diseases and Conjoint Associate Sebastian van Hal have contributed to public discussion through The Conversation website (opens in a new window).

Dr Elise Maher, a member of the inaugural cohort of the Western Sydney University MBBS program has been named as a finalist in the NSW Minister for Health/Cutcher & Neale Junior Medical Officer of the Year. She is the nominee from the Bankers and Campers training network which incorporates Campbelltown Hospital where Dr Maher has been working since graduating at the end of 2011.

The School of Medicine Year 5 Prize afternoon was held on the 7th December 2012.  The purpose of this event is to congratulate and celebrate the most outstanding students in the School's 2012 graduating cohort and acknowledge the generous support of prize donors to the School of Medicine who formally present the awards.
The prize ceremony is held at the end of the academic year to ensure that medical students have their prizes awarded prior to Graduation which was held on the 20th December 2012 and before graduates commence their internships in 2013.

The Dean, Professor Annemarie Hennessy and the Deputy Dean, Professor Brad Frankum expressed their pride in the achievements of the graduating cohort and were especially pleased to recognise and congratulate some of those most outstanding graduating students.

On behalf of the School of Medicine, the Dean also thanked the School's Donors and Community Partners for their generous support in  sharing the School's commitment to academic excellence and recognising the achievements of our students and contributing to the School more broadly.

Congratulations to all our prize winners for your hard work and dedication to your medical education. You have set a very high standard and are a real credit to the School of Medicine and to Western Sydney University.   We wish our students all the best for your careers and in the next phase of your endeavours.

Congratulations to all Year 5 Graduating Students of 2012!

Lots of buzz at the Brain Bee Challenge

124 of the brightest Year 10 students in NSW converged on the Western Sydney University's School of Medicine to compete in the State Finals of the Australian Brain Bee Challenge on Thursday 26 July.

Individual and team competitors battled out each round, to the sounds of their school cheer squads, with the ultimate prize of Brain Bee NSW State champion ultimately being awarded to Vivienne Qingyu Zhang, from Ascham School. 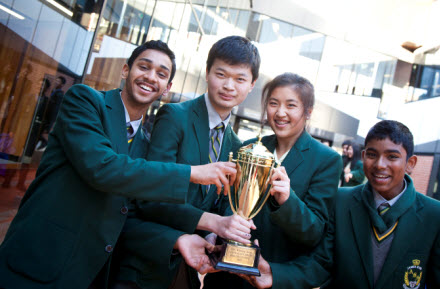 As the winner of the State Final, Vivienne will compete as the NSW representative at the National Brain Bee Challenge in Melbourne in February, 2013, during the annual Australian Neuroscience Society conference.

33 high schools from as far afield as Kempsey, Wagga Wagga and Orange participated in the NSW Finals.

The students competed in live question and answer rounds where they were tested on topics relating to the functions of the human brain such as intelligence, memory, emotions, sensations, movement, stress, sleep and addiction.

Vivienne says she prepared by studying the whole week prior to the competition.  "I like most subjects at school but I would really like to be a neurosurgeon one day," says Vivienne.  "My philosophy teacher put me forward for the competition and I am really glad that I got to compete in the Brain Bee Challenge. I would encourage students to enter the competition next year. I was fortunate enough to meet a lot of great people and I really got a lot out of the day."

Professor Vaughan Macefield, from the Western Sydney School of Medicine and NSW Coordinator of the Australian Brain Bee Challenge, says the competition was a great success.

"For the last five years, Western Sydney University has proudly hosted the Australian Brain Bee Challenge. These very bright students get to test their knowledge of the brain and participate in engaged learning that will hopefully inspire a new generation of neuroscientists," says Professor Macefield. 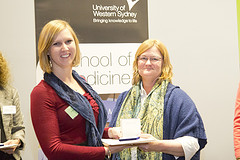 A Combined Schools Prize Night was held with the School of Science and Health, School of Nursing and Midwifery and School of Medicine on 3 July for students who completed Years 1, 2 or 3 in 2011. The evening was attended by Academic and Professional staff from all three schools, as well as, by Donors, Students and their guests.

Prize recipients from the School of Medicine were:

College of Health & Science Dean's Medal for the 2011 Academic Year was awarded to Elise Maehler. 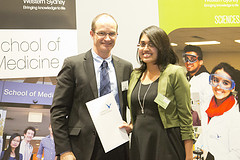 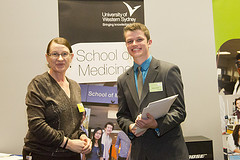 Congratulations to all our prize winners for your hard work and dedication to your medical education.
We also thank our Donors for their generous support and interest in the success of our students.
The School of Medicine is very proud to be recognising the achievements of students across academic excellence and professionalism, both of which are highly valued by our staff, conjoint supervisors and your future patients.
The musical interlude on the evening was provided by current Year 2 students from the School, Mr Alex Garner on Guitar and Ms Danielle Klingberg on Clarinet who kept the audience entertained with their talents.

Jens Coorssen, Professor of Molecular Physiology has recently been recognised by Brock University in Canada where he obtained his bachelor and masters qualifications as one of their 'alumni of distinction'.