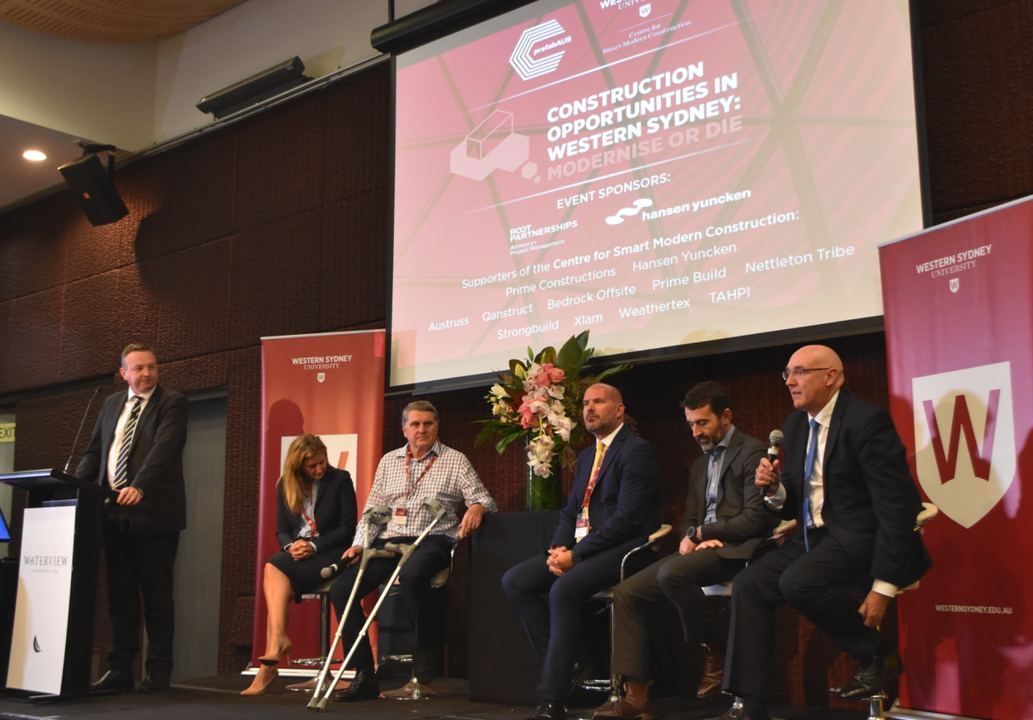 Mark Farmer's presentation to over 200 Western Sydney constructors and academics at the recent 'Construction Opportunities in Western Sydney - Modernise or Die' conference carried a strong theme about the need to re-skill the industry's workforce for the jobs of tomorrow. Farmer drew on extensive research that informed his 2016 report to UK construction.

The Conference was co-hosted by PrefabAUS and Western Sydney University's Centre for Smart Modern Construction - c4SMC. Mark Farmer was en route to the PrefabNZ, CoLab the following week.

Farmer emphasised the need to embrace the the opportunities that were now presenting in the pre-manufacture construction space which is seeing more traditional trades based fabrication work on-site move off-site."This is a huge structural change to our industry". Farmer has called for a fundamental rethink in how the UK's construction supply chain can be organised more efficiently, "those organisations that embrace change will survive and those that don't, won't" Construction related organisations be they designers, surveyors, manufacturers or constructors need to decide "what side of the line they wanted to be on", to assure their relevance and viability in the medium term future. "These are pressing issues", he said.

Farmer pointed to the need for the industry's clients to be part of modernising the construction industry. He said "they were the ones paying for the rising cost and unpredictable quality of construction". Without their leadership the industry will carry on with business as usual, "but that is simply unsustainable" he said. Farmer described an industry that had been operating at near record levels in the UK for the last 10-years where no-one was making any money. He described a situation that many attending the conference drew parallels with in Australia. And in New Zealand the woes of Fletcher Construction were salutary.

Farmer described the UK's Tier 1 contractors as being the root cause of many of the industry's structural challenges. He described over-zealous risk allocation to the industry's supply chain to a point where many contractors were no longer in charge of their own projects. They were dependent on sub-contractors two and three layers down the supply chain being reliant on unpredictable workforces and performance. He evidenced Tier 1 contractors like recently bankrupt Carillion, as having moved beyond being able to pass through the cost of construction to their customers to a position where they could not control their own costs.

Farmer made the point, that the challenges he was describing was not just a UK problem and that Australia and New Zealand were not immune. A summary of the Modernise of Die conference can be viewed via the link below and a full video of Mark Farmer's presentation is provided at the end of this article.

The conference was unique in that it had a panel of leading NSW construction clients who all had over $5.0 billion capital works programs to be rolled out over the next 3 to 5-years. Presenters from Western Sydney Airport Company, NSW Health and Education Infrastructure spoke to how each organisation was embracing the need to rethink their procurement strategies to address the declining skills and industry capabilities that would impact their projects in coming years. Speakers gave examples of how they were organising to drive increasing standardised construction elements to take advantage of more systemic off-site-fabrication alternatives. These trends could already be evidenced on their projects to day. The speakers acknowledged that business as usual was not sustainable if they were to meet their future project delivery commitments.

Farmer gave a case study relating to the planned expansion of the UK's Heathrow airport and how this could be relevant to the delivery and future industry capacity building around the delivery of Western Sydney Airport. He described how Heathrow Airport achieved an overwhelming response as 121 sites from across Britain bid to become a Heathrow logistics hub and help build Britain’s new runway. Heathrow’s logistics hubs are set to revolutionise UK construction – pioneer off-site manufacturing to reduce overall cost of expansion, cut local emissions and create a new industry for the UK. Farmer later spoke of how regional hubs were organising around local governments, universities, manufacturers and technology companies to present collaborative value propositions that were strongly supported by local economies and communities. The Centre's Industry Engagement Lead, David Chandler has called for the Greater Sydney Commission to add a Smart Modern Construction Hub to the Commission's aspirations for a legacy of the next 20-years of expansion planned across the region. Chandler says that, "in the same way that the UK hubs for off-site construction manufacture in the UK were being modelled, an ideal blue print for the sub-regions of Western Sydney, Wollongong and the Hunter" could be cloned to create long-term new jobs and enterprise opportunities. He said that, achieving this would involve much greater collaboration between Universities and TAFE's to develop clearer insights into how the skilling of the future workforce on and off-site will unfold. Until this occurs, "continuing to backfill the industry's skill shortages in anticipation of more of the same old construction model" that Farmer describes in the UK, would not be beneficial.