This is the university's premier research facility for magnetic resonance and is amongst the best of its kind for NMR diffusion and MRI diffusion experiments. The staff of the facility is internationally recognised for the development and application of magnetic resonance based diffusion studies. The BMRF forms a node of the Australian National Imaging Facility (opens in a new window).

Find out more (opens in a new window) details and examples of applications. 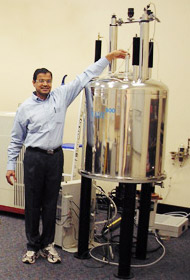 For more information on the Bio-Medical Resonance Facility please visit the Nanoscale Organisation and Dynamics website.