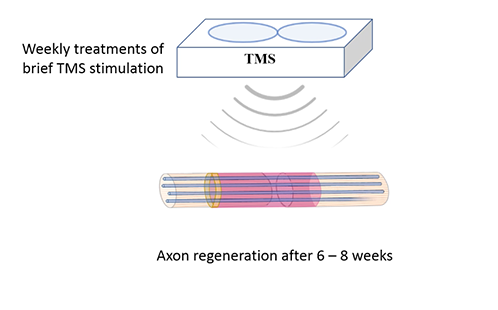 In contrast to conventional electrical nerve stimulations that have low success rates and may cause scarring and inflammation, the new ‘graft-antenna’ is an innovative and minimally-invasive device that functions as both a wireless stimulator and biodegradable scaffold for nerve repair.

According to Dr Antonio Lauto, Lead Researcher at Western Sydney University’s School of Science and Health and the MARCS Institute for Brain, Behaviour and Development, repairing and electrically stimulating peripheral nerves with a non-invasive device is extremely challenging.

“This is the first time researchers have managed to perform these tasks together. Our innovative new system consists of two parts – an implantable scaffold glued to the injured nerve by a laser, and a sub-millimetric radio antenna that is fit inside the scaffold and powered by a magnetic coil named “transcranial magnetic stimulator”, said Dr Lauto.

The unique graft antenna is made of chitosan, a material derived from shrimp shells. The thin film clings tightly to the nerve graft and features a small golden ring that acts as an antenna. Both materials – chitosan and gold - are non-toxic and biologically compatible.

Dr Lauto added: “The device is anchored to tissue with a low power laser exploiting the photoadhesive properties of the chitosan. This negates the need for sutures which are notoriously invasive and lead to complications in 30 to 40 per cent of patients.”