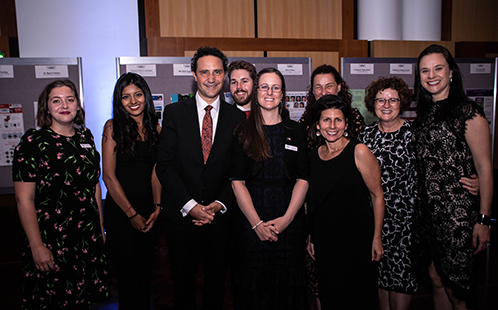 Western Sydney University welcomes two postgraduate scholars, Kaleigh Rusgrove and Nikita Roy, visiting from the United States to study at the University as part of the Fulbright Scholarship program.

In further good news, Western Sydney University’s Victoria Austin, from the Hawkesbury Institute for the Environment, has also received a Fulbright postgraduate scholarship to study in the United States, and will depart later this year.

Western Sydney University’s Vice-Chancellor and President, Professor Barney Glover AO, highlighted the importance of the Australian-American Fulbright Commission as he congratulated the scholars.

“Through the Australian-American Fulbright Commission, the University exchanges research findings, shares ideas and finds common values between globally-focused universities. We are proud to be part of such an important and prestigious program,” said Professor Glover.

“As a research-led University, Western Sydney University is very pleased to support the exchange opportunities and participate in the valuable international collaboration provided by the Fulbright Program,” said Professor Arvanitakis.

Fulbright recipients, Kaleigh and Nikita, both from the University of Connecticut, will spend up to 10 months in Australia conducting research at the University in their respective fields of expertise; while Victoria will study at Cornell University in Ithaca, New York.

All three scholars were recently recognised at the 2019 Fulbright Gala Presentation Dinner held at Parliament House.

Kaleigh holds a Master of Fine Arts and through her unique photographic narrative style she will explore environmental issues to create a body of compelling work during her exchange.

“I’ve been focusing on seeds as a representative issue within climate change for a few years now, because the specimens themselves as well as the facilities that hold them are often visually stimulating.

“There’s something magic and almost fairy-tale-like about the promise of seeds as saviours in this terrible situation we’re faced with,” said Kaleigh.

Nikita, who is undertaking a master’s degree in health, will study the association between genetic polymorphism and cognitive function in humans.

“Genetic polymorphisms are unique differences in our genetic code that can result in various health outcomes. I’m exploring one particular polymorphism: Val66Met.

“This genetic trait has been shown to cause a decreased secretion of Brain-Derived Neurotrophic Factor in our brains, which is needed for many healthy brain processes,” said Nikita.

“The discovery that female song in song birds is widespread and ancestral has huge consequences for our understanding of the evolution of song.

“This opportunity will allow me to work with Professor Mike Webster, a world leader in the field of animal communication and signalling,” said Victoria.