The following article by Jill Rowbotham was published in The Australian (opens in a new window) on 24 July 2019.

The federal government should match its enthusiasm for infrastructure and economic development in western Sydney with an equal commitment to producing the graduates who will be needed to work there, says Western Sydney University vice-chancellor Barney Glover.

Professor Glover said federal government policy settings were “highly geared to the economic impact of a new airport” in western Sydney and that other transport development and hospitals were also part of that picture.

“That’s a major economic driver for Australia, not just Sydney or NSW,” he said. “We need to reflect that same government commitment to transport, health and a new airport in terms of capital investment in the higher education system because it needs to generate the graduates and the workforce of our future.

“So I think they’ve got to get their policies in alignment. At the moment it’s not clear that they are. I’m sure we’ll be advocating to them that they should shift alignment.”

Professor Glover, who is driving substantial development across his university’s multiple campuses, said WSU was particularly reliant on federal funding because only 16 per cent of its 48,000 cohort was international students, whose fees bol­ster the ­finances of other ­institutions.

“We don’t have the capacity to see massive growth in inter­national student numbers providing us with a revenue stream to offset the funding freeze and that impact. These are careful considerations for us as we plan the next few years.”

The university’s Western Growth strategy is intended to develop its land and properties to accommodate its academic needs while allowing it to make judicious sales that will go ­towards building an endowment fund Professor Glover anticipates will be about $400 million by next year. “A proportion of the investment returns will be used to support transformational strategic projects focused on strengthening innovation and resilience within the university along with major teaching and research endeavours.

“The board of trustees recently approved an initial allocation of up to $55m over the next five years subject to performance of the investments.”

When its three campuses came together in 1989 — Hawkes­bury Agricultural College, ­Nepean College of Advanced Education and Mac­arthur Institute of Higher Education — the new university acquired a considerable land bank. While 1300ha of the 1800ha total is the farm at Hawkesbury, there are other properties that can be sold or leased. A 100ha residential ­development on the Campbelltown campus was sold, and other than that, Professor Glover says there are “much smaller amounts at Westmead, Werrington North and Nirimba”.

“We are now primarily focused on co-development of our landholdings where we retain ownership either indefinitely or for a considerable period. So it’s not possible to currently indicate what proportion of those holdings will eventually be sold.”

The university is designed around a hybrid model of traditional “horizontal” and “vertical” campuses for students in western Sydney’s CBDs, in places such as Parramatta and Bankstown. In 2017 it opened the Peter Shergold building in Parramatta that houses 10,000 undergraduate and postgraduate students from the business school and other discipline areas.

For the most part Professor Glover said the university would retain its landholdings but offer long-term leases to corporate partners. The university recently gained a public credit rating of Aa2 from Moody’s ­Investors Service as a prerequisite to seeking loans on capital markets to help bring some of its large projects to fruition.

WSU vice-president (finance and resources) Peter Pickering said that with an existing facility of $300m, the university was seeking the capacity to borrow up to $450m but with net assets last year of $2 billion would not be highly leveraged.

“Part of our methodology is to work with partners — obviously we are not going to take on all the commercial risks on these — but it still does call for, over the next five to seven years, the need to bring capital debt into the university,” Mr Pickering said.

He cited the Innovation Hub at Parramatta, building on the Westmead site, a commercial ­development at Werrington and the Bankstown project as four that funding could support in the next 12 to 18 months. 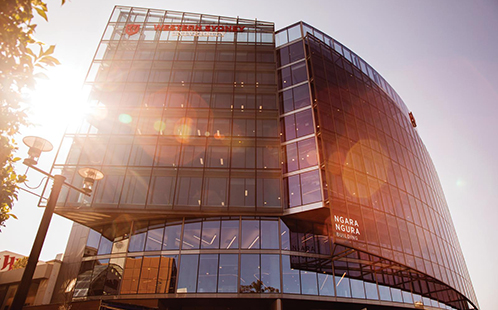