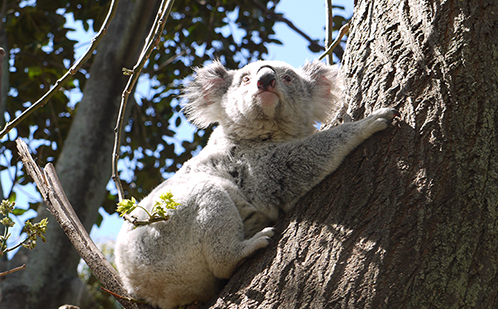 Western Sydney University research has confirmed that land clearance and bushfires are the ultimate causes of stress in wild koalas living in rural-urban areas; even more than vehicle collision, dog attacks and disease.

The study is the first scientific evidence of the impact of human-induced environmental change as the leading stressor on wild koalas and is the outcome of several years of focused research by Western Sydney University’s Stress Lab founder Dr Edward Narayan, with faecal samples taken between 2012 and 2018 from 291 koalas.

The research supported through a grant from the International Fund for Animal Welfare (IFAW) assessed stress hormone levels in wild koala sub-populations facing environmental trauma and disease in New South Wales and South Australia. The findings were then compared to a healthy breeding sub-population of koalas living in a forest reserve in Queensland.

“Although everyone knows and talks about the potential impacts of land clearance, bushfires, vehicle collision, dog attacks and disease, no other research has put a quantitative figure on the exact stress levels generated by exposure to different stressors of koalas,” said Dr Narayan.

As part of the study, koalas found living in areas with land clearance showed significant chronic stress. This was indicated by high levels of the stress hormone cortisol found in faecal samples.

This research makes it evident that koalas living in areas of past or on-going habitat alteration will be most stressed and most vulnerable to extinction. Bushfires were the second leading cause of stress, followed by vehicle collision and dog attacks. Notably, diseases including chlamydia were behind the risks presented by environmental trauma.

Rebecca Keeble Regional Director of IFAW said: “The research indicates that policymakers and developers must factor in the long term welfare of individual animals when planning infrastructure upgrades or new developments.”

“Decision makers can no longer look at acceptable death levels or harm to individual animals during the construction phase of a development when green-lighting projects. This research proves that the true impact of a development on local koala populations remains well after the bulldozers and construction teams have moved on,” said Ms Keeble.

“Koalas must be given more space to live and thrive in if we are going to successfully overcome the challenges posed by urbanisation, human-wildlife conflict and other issues created by human interference.”

The research was published in Scientific Reports (Springer Nature) (opens in a new window).