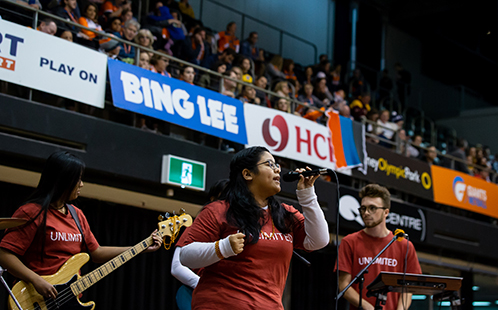 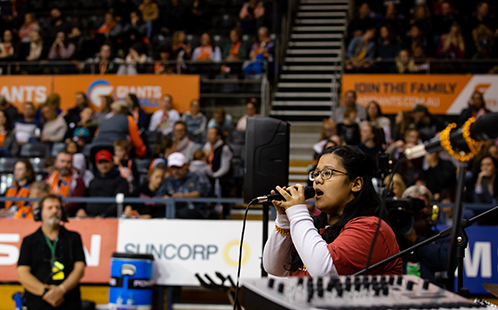 Jayd Abacan Luna, Ashleigh Arraiza, Madison Arraiza, Liam Goodall and Sam Beazley – who perform together on behalf of Western Sydney University and as a group called the GROOVE OPERATORS — were the perfect fit for GIANTS Netball who were looking for something fresh and new to add to their games this year.

“Playing for GIANTS Netball is an absolute pleasure. One of our bandmates made a joke just before we got the email, saying that we would be playing Qudos Bank Arena in a month — it was almost surreal finding out that we got the gig,” said vocalist and Blacktown resident Jayd Abacan Luna.

“Granted, we are hoping to sell out stadiums on our own in the future but it’s a great opportunity. It’s been a challenge to keep up but we have never fallen short of delivering our very best at each game.”

The group, who have been playing together for nine months, will deliver a series of performances as part of the premier Australian league, Suncorp Super Netball. This includes providing pre-match and quarter and half-time entertainment and performing short stings after the GIANTS score a goal to further excite the crowd.

Keyboardist and Campbelltown resident Liam Goodall said the best thing about performing at the games is the adrenaline rush: “Just the nerves you get seconds before the performance. Then the Western Sydney University banner comes up on the massive screen and the announcer starts and then for the next four minutes we own the arena. It is an insane feeling and very different to playing our regular gigs.”

Besides the enjoyment the band gets out of playing, the partnership is a welcomed opportunity for the students to perform live to a big audience, with games drawing crowds of up to 10,000 people.

“At the moment it’s not common to see live music at sporting events unless it’s the State of Origin final or the Olympics. GIANTS Netball are doing a great thing giving us students an opportunity to feel what it’s like to perform at big sporting events and I would encourage other organisations to follow their example,” said Liam.