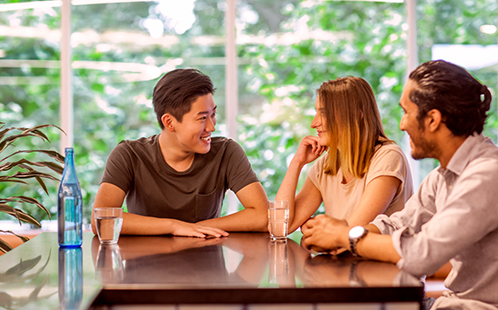 Western Sydney University graduates have been ranked first in the state and second nationally for overall employer satisfaction, according to the latest data from the Federal Government’s Quality Indicators for Learning and Teaching Employer Satisfaction Survey.

The new findings, which combine survey results from 2016, 2017 and 2018 across all Australian universities, saw graduates from the University receive a satisfaction rating of 87.8 per cent — a 2.2 percentage point increase year on year and 3.5 percentage points above the rating for graduates of all universities.

The University’s graduates also ranked first in Australia for collaboration — one of the key aptitudes assessed by the survey which invites feedback from direct supervisors of recent graduates.

According to Deputy Vice-Chancellor (Academic) Denise Kirkpatrick having graduates rated so highly by their direct supervisors is one of the highest compliments.

“Western Sydney University prides itself on equipping students with the theoretical and practical skills needed to excel in the contemporary workplace,” says Professor Kirkpatrick.

“Being rated second in Australia and first in New South Wales out of 41 universities is something our graduates, current students and academic and professional staff can be immensely proud of.

“The survey reaffirms that our graduates’ abilities to work in teams and to communicate and relate to their colleagues are second to none – this is an aptitude capability we know is highly valued by employers and one we will continue to foster.”

The Employer Satisfaction Survey is the largest national survey of its kind and is funded by the Department of Education and Training. The survey encompasses the views of 5300 employers to date and reports on the skills, attributes and work readiness of recent graduates.

Full results of the Employment Satisfaction Survey can be viewed on the Quality Indicators for Learning and Teaching (QILT) site (opens in a new window).