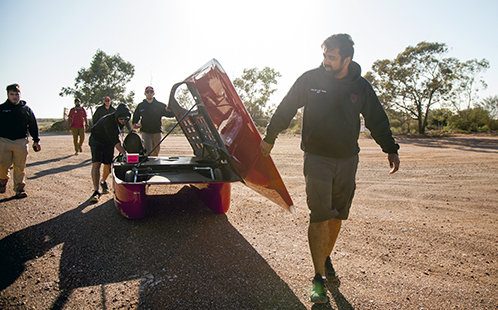 Two Western Sydney University alumni have been announced as finalists in the 2019 Seven News Young Achiever Awards – honouring young people contributing to the community through exceptional and visionary science and technology achievements.

Aj Verma, 26, and Domenic Raneri, 29, have both been nominated in the Western Sydney University Science and Technology Award category in recognition of their innovative use of science and technology to improve outcomes across two very different fields – mechanical engineering and virtual crime scene investigation.

“Western Sydney University has never had a solar car team before, let alone one of the world’s best, we spent a lot of time talking to tens of thousands of students over the years about the benefits of moonshot projects like the solar car,” says Aj.

“To be selected as a finalist when so much of my application was based on the work I did outside of my studies and job really was a cherry on top of a lot of my efforts.”

As a result of winning the American Solar Challenge in 2018, the North Ryde resident was contacted by American aerospace manufacturer SpaceX and invited to interview for his dream role.

“SpaceX really appreciated my ability to work with a team from Western Sydney to compete and beat the best universities in the United States.”

“The role I interviewed for was a composites reliability engineering role working on the Mars rocket, which came about because of the work I did in 2015 to design and build composite suspension for the solar car – they found a role that fit my skill set.”

With his long term goal to aim for the stars, Aj is currently working on a rocket ship of a startup run by an ex-solar car team member, building everything from Star Wars style 250kmh flying cars to delivery drones with Google and military drones.

Domenic, a forensic science graduate and now Crime Scene Reconstruction Specialist with the NSW Police, is responsible for adapting 3D technology from the mining industry to allow complex crime scenes to be reconstructed virtually. 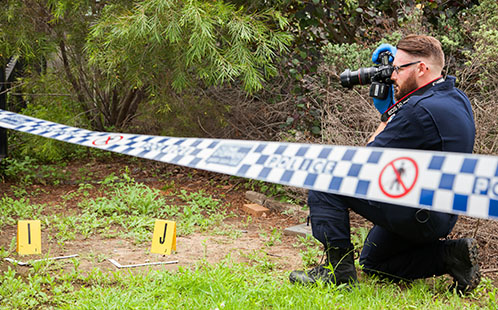 “I was tasked to focus wholly on investigating what could be achieved using 3D laser imaging and to figure out a way of using the devices to record crime scenes,” says Domenic.

“Initially documentation of scenes alone was the goal but as I researched these systems, learned the intricacies of their data and implemented them, I realised that more could be achieved and that it would be possible to not only record but analyse evidence in the 3D space, extending our investigative capabilities.”

The North Strathfield resident paved the way for virtual crime scene investigation to be used retrospectively in past crimes, including the Lin Family murders and the Lindt Cafe siege investigation.

“It’s important that we are constantly seeking to know more, and to do more (and better) by learning how we can improve, extend the capabilities we have and what new technologies may be applicable.”

“I’m most drawn to my work through the impact on the community of helping to bring criminal offenders to justice. To be in turn recognised by the community for my contributions in this field is very honouring.”

The winners and finalists will be awarded 1 March during an Awards Gala Presentation Dinner held at Doltone House, with one of the nine category winners to be chosen as the 2018 NSW/ACT Young Achiever of the Year.

All finalists will go into the People’s Choice Award. To read more about each finalist and to vote before 25 February, click here (opens in a new window).