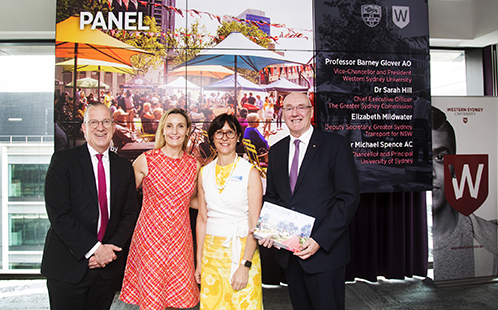 The report identifies the economic and strategic importance of the region and highlights infrastructure and active transport, better collaboration between all three levels of government and industry as immediate priorities for continued growth and momentum.

Western Sydney University Vice-Chancellor and President, Professor Barney Glover AO, noted that for more than 30 years, the University had been committed to transforming the region through world-class research and teaching.

“This region-shaping alliance with the University of Sydney leverages the strengths of both institutions, delivering the higher education, economic and employment opportunities that an area of this significance deserves,” said Professor Glover.

University of Sydney Vice-Chancellor and Principal Dr Michael Spence AC said there was no doubt that greater western Sydney held great promise as an innovation district.

“We’re investing $500 million to establish our second major campus at Parramatta-Westmead. This will be a place where our students and researchers will use automation and innovation to solve real world problems and where the jobs of the future will be created,” Dr Spence said.

The report highlights include:

Read the report here (opens in a new window).