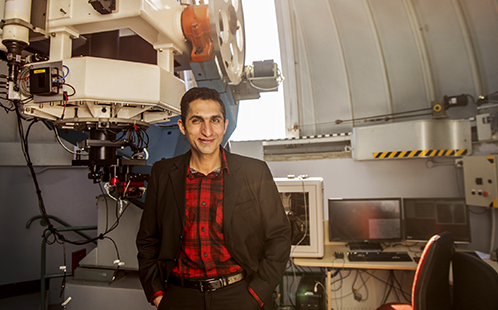 After waiting for three years for his refugee status to be acknowledged, Western Sydney University PhD student Rami Alsaberi has made a new life in Casula, Australia, and an unusual celestial discovery.

Reflecting on his two-year anniversary living in Australia, Rami recalls being forced to leave Baghdad with his family in 2013 and the relief he felt arriving in Sydney four years later.

“When I arrived in Australia I accidentally contacted Professor Filipovic, the Chair at Western Sydney University Penrith Observatory, about a tour I intended to take the next day. He welcomed me and encouraged me to consider undertaking further studies at the University,” said Rami.

The Iraqi born researcher went on to lead the discovery of a pulsar wind nebular — a giant, interstellar cloud comprised of supernova remnant and pulsating star (pulsar) — in a neighbouring dwarf galaxy near the Milky Way called the Small Magellanic Cloud.

“The discovery of the second-known pulsar wind nebulae in Small Magellanic Cloud is significant because it’s the first confirmed detection of a pulsar-powered bow shock nebula, found outside our own Galaxy,” he said.

“The uniqueness of this discovery is the point source (pulsar) coincides in both radio and x-ray observation with a jet (cloud) behind it, which is an indication of supersonic movement.”

Accompanying Rami on the research team was Professor Miroslav Filipovic, from the University’s School of Computing, Engineering and Mathematics, who is his PhD supervisor.

“I loved astronomy and space since I was an undergraduate student at the University of Baghdad,” said Rami.

“It was very difficult to move; we left everything, our house, our friends, and our jobs.

“I realised that with hard work, discipline and dedication you can achieve whatever you want. I’m working on another supernova remnant project now while preparing for Confirmation of Candidature for my PhD.”

The research is published in the prestigious Monthly Notices of the Royal Astronomical Society (opens in a new window).

Alliance of four universities to deliver game changer in education

The University of Newcastle, UNSW Sydney and the University of Wollongong – acting together as the ‘NUW Alliance’ – last night announced Western Sydney University would be joining the Alliance as a joint venture partner.

Huge challenges are preventing new mothers, their infants and adolescents from eating healthy food and getting adequate nutrition.

Upcoming forum to explore resilience in the Hawkesbury

Residents of the Hawkesbury are invited to join an upcoming forum presented by Western Sydney University and partners, that will explore community resilience to climate events.