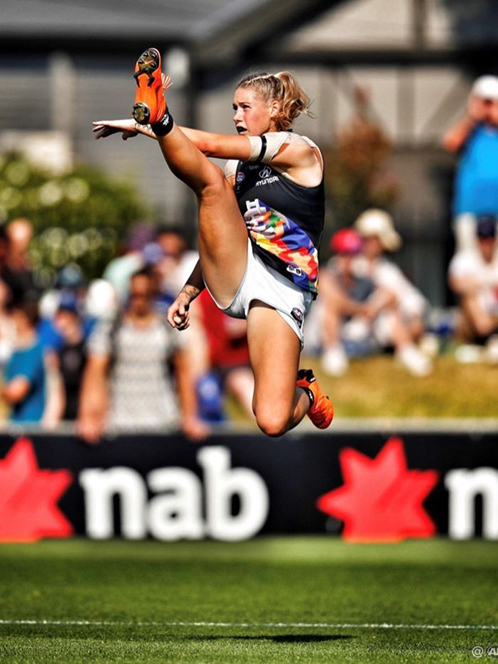 “Despite accelerating gains in recent years, the long history of male domination of sport and the sport media means there is still considerable resistance to accepting women as elite athletes, especially in team sports”, commented Professor Rowe, author of Sport, Culture and the Media: The Unruly Trinity.

“Sport photography has long been a gender battleground. From the annual Swimsuit Issue of Sports Illustrated to nude calendars, there has been a frequent sexualisation of images of sportswomen. Sometimes, shots have been closer to soft pornography than sporting imagery”.

“Sportswomen have tended to be shown in passive poses or with accompanying children and partners, while sportsmen have been shown in full, active flight”, he said.

“When Tayla Harris was shown in this way, some internet trolls disparaged her sporting ability and fetishised parts of her body. They cannot accept that a woman can excel in sport and that action photos can be revealing because the body is in extremis – that is why people who like the physical culture of sport play and watch it in the first place”.

“No doubt some would object that male sporting bodies have also been subjected to jokes, most famously The Dream with Roy and HG during the Sydney 2000 Olympics. But the gender dynamic is completely different. Men have not, unlike women, had to fight for legitimacy within sport. Making fun of men in these circumstances is one small way of puncturing the overblown heroism of much male sport”.

“The digital world has intensified the politics of sport photography and commentary, and Channel Seven’s temporary take down of the marvellous shot of Tayla Harris flying through the air was ill-advised. In the name of protecting her, they fed the trolls. They will just have to get used to the fact that women’s sport is here to stay, and we have the photographic evidence to prove it”, Professor Rowe said.

Emeritus Professor David Rowe can be contacted for interviews directly on D.Rowe@westernsydney.edu.au or 0420 303 815.