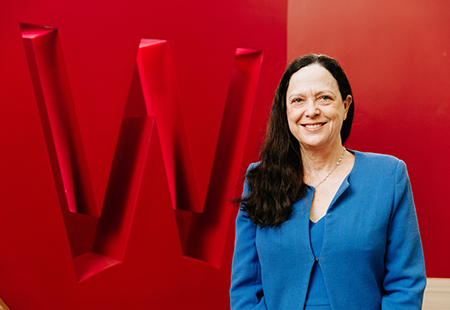 Vicky was the Director of the Communicable Disease Branch within the Population and Public Health Division of NSW Health from 2013 until September this year.

Population and Public Health coordinate the strategic direction, planning, monitoring and performance of population health services across the state. The Branch works like a surveillance team,  monitoring the incidence of diseases and viruses such as influenza, measles, meningococcal and whooping cough.

Working closely with the NSW public health network and hospitals, the team identifies potential outbreaks and works to prevent them from spreading in the community.

Vicky is currently a medical advisor to the Population and Public Health team seeking to eliminate hepatitis C in NSW by 2028.

She monitors the most pressing medical and health concerns in New South Wales and often addresses the media and general public to provide updates on the risk of communicable diseases and to provide important education and advice. She also acts as an important public health advocate, correcting misinformation and working to maximise important health initiatives such as immunisation.

Vicky has a Bachelor of Medicine/ Bachelor of Surgery and Master of Public Health (Honours) from the University of Sydney. She is a member of the Royal Australian College of Physicians. 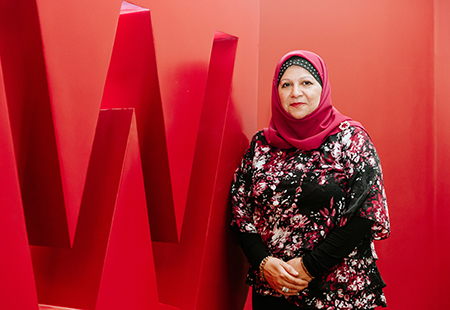 Faten is President of the Muslim Women’s Welfare of Australia, which is a non-profit, community-based organisation dedicated to empowering Muslim women through education and involvement in the community.

Faten arrived in Australia in 1989 with a background in nursing from the American University of Beirut in Lebanon. By 1992, she was working as a registered midwife at Westmead Hospital.

As a migrant woman working in Western Sydney, she developed a deep understanding of the health issues effecting women from non-English speaking backgrounds in Australia.

She completed a Master’s degree here at Western Sydney University, in teaching English as a second language, which set her on the path to become a renowned community leader, health educator, and advocate for migrant women.

In 2012, Mrs El Dana was awarded the Medal of the Order of Australia for service to the Lebanese community of New South Wales. She now holds  Executive positions in several organisations including 2MFM and is the Head of the Arabic department at Al Amana College. 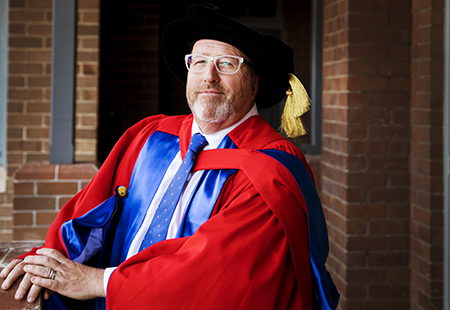 Christopher Brown AM is the Founding Chair of the Western Sydney Leadership Dialogue, a not-for-profit regional think-tank, and Executive Chair of national strategy firm, Taylor Street Advisory, which serves blue chip organisations from the private and public sector.

Raised in Parramatta, Christopher has been a strong advocate for his community. In 2010, he wrote the landmark paper, “Parramatta – Australia’s Next CBD”, sparking political and commercial momentum in Western Sydney, and led the Parramatta Partnership Forum.

During the 2000 Sydney Olympics, Christopher was the Honorary Attaché to Botswana. He also served as an Ambassador for the 2000 Paralympic Games and the Australian Republican Movement, and chaired the business arm of the Madrid-based United Nations World Tourism Organisation.

Christopher has previously served as a Director of the Commonwealth’s Moorebank Intermodal Company and sat on the ANZ Stadium Board. He was a Director of Tourism Victoria, and LUCRF Super, the country’s oldest industry superannuation fund. He also chaired Clean Event Australia and the RM Williams/Australian Agricultural Company joint venture.

Christopher sat on the Federal/State Commission that named Badgerys Creek as the location for Sydney’s second airport and served on the NSW Transport and Planning Blueprint Panel. Christopher also convenes civic leadership groups for Liverpool, Blacktown, Olympic Park and Canterbury-Bankstown, and is Chair of the South West Sydney Local Health Advisory Board and the Campbelltown Health & Education Precinct. He led successful campaigns to secure a Federal/State-funded Metro Rail link to the new airport, a Light Rail link to Olympic Park and for the development of BankWest and ANZ stadia. He is a Parramatta NRL tragic and founded the Eels Business Roundtable.

Christopher is a Fellow of the Australian Institute of Company Directors, a graduate of the New Zealand Institute of Strategic Leadership and was an Adjunct Professor at the University of Technology Sydney Business School.

Christopher is an exceptionally strong supporter of the University. He was a Trustee of Western Sydney University for eight years, and retired as a Pro-Chancellor in 2019.  During his time as a Board member, he played an active role in many strategic decisions that have shaped, and will continue to influence, the future of the University. He also served as Founding Chair of the University’s External Affairs Working Group and its Academy Advisory Board.

In June 2014, Christopher was appointed a Member in the Order of Australia, in recognition of his service to industry and the community. Murray obtained his PhD from the University of New South Wales in 1989 based on ultrastructural studies of ageing and degeneration of the human retina.

Prior to this, he trained in electron microscopy under Dr Mel Dickson and Professor Athol Lykke at the University of New South Wales and then worked with renowned ophthalmologists Dr Shirley Sarks and Dr John Sarks at Lidcombe Hospital from 1981 to 1989.

Murray then spent a further 7 years with Lidcombe Hospital, where his post-doctoral work contributed to defining the role of chronic inflammation in the pathogenesis of age-related macular degeneration.

A leading Biochemistry and Cell Biology researcher, his research interests continue to focus on the cell biology of chronic inflammatory processes in retinal disease, renal disease and cancer. He is leader of the clinical sciences stream of the Ingham Institute for Applied Medical Research at Liverpool.

In 2010, Murray was awarded a Founding Fellowship in the Faculty of Science of the Royal College of Pathologists of Australasia and in 2018 he was the recipient of the Lady Mary Fairfax Distinguished Researcher Award.

He is a Fellow of the Royal Microscopical Society (FRMS) and a member of the European Microscopy Society, Society for Histochemistry and the Australian Microscopy and Microanalysis Society. 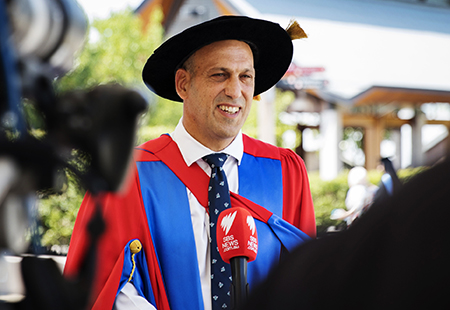 His Honour Imad Abdul-Karim is a former Sydney prosecutor who is currently serving as a magistrate of the Local Court in Sydney’s West.

His Honour fled war-torn Lebanon with his parents at the age of 14. When he arrived in Australia he spoke Arabic and very limited English and French. Imad attended Endeavour High School in Caringbah after learning to speak English in an annex of Beverly Hills Girls High School.

He worked hard to support his young family while studying Science at the University of Wollongong and working as a taxi-driver and a kitchen hand. He went on to study Law at Western Sydney University and graduated in 1998, becoming one of the University’s first graduates of the School of Law.

In 2007, His Honour was awarded a Churchill Fellowship to study the investigation and prosecution of terrorism related offences in the public interest in the United States of America, Canada, and the United Kingdom. In 2012, he received his Specialist Accreditation in Criminal Law from the Law Society of NSW.

Prior to his appointment as a Magistrate, His Honour was a member of the Specialist Accreditation in Criminal Law Advisory Committee of the Law Society, and previously taught Foundations of Law at the University of Sydney. He has been invited by the United Nations and Global Center on Cooperative Security to attend regional workshops on counter terrorism related matters, and, in 2014, was appointed as a Public Prosecutor by the Republic of Narau to assist in the prosecution of a riot involving 52 individuals.

Sworn in as a NSW Local Court Magistrate on 13 March 2017, the Senior Vice-President of the NSW Bar Association (Arthur Moses SC) said “You now hold the distinction of being the first judicial appointee from Western Sydney University”. 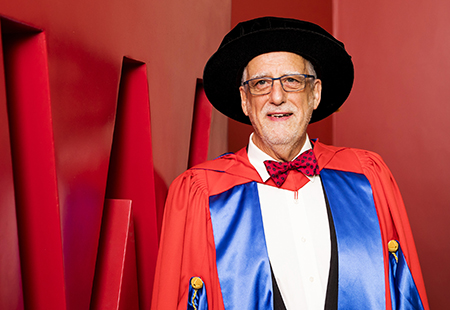 Adjunct Professor Carrillo Gantner AC is an actor, director, theatre founder, cultural leader and philanthropist. He is dedicated to the development of the arts and culture across the breadth of Australian society, and fostering closer cultural relationships with Asia. He is currently the Chairman of the Sidney Myer Fund, a position he has held since 2004, and is an Adjunct Professor at the Australia-China Institute for Arts and Culture at Western Sydney University.

Professor Gantner is well-known for his work in the Australian theatre. He was the founder and Artistic Director of the Playbox Theatre Company in Melbourne in 1976 and was the driving force in the establishment of the Malthouse Theatre complex which opened in 1990.  He is also a professional actor, having performed in over 40 professional stage productions, the latest being King Lear which showed in several Australian cities, Japan and Korea. He has also acted in Chinese television soap opera and a recent Chinese movie shot in Australia.

Carrillo chaired the Australia Council’s Performing Arts Board from 1990 to 1993 and the Melbourne International Comedy Festival from 1994 to 2000. He was President of the Victorian Arts Centre Trust from 2000 to 2009 and President of Melbourne International Arts Festival from 2010 to 2014.
Professor Gantner has had a life-long interest in Asia. He studied Chinese briefly before his appointment as the Cultural Counsellor at the Australian Embassy in Beijing from 1985 to 1987.  From 1992 to 2006, he was Chairman of Asialink, Australia’s leading centre for the promotion of public understanding of Asia and Australia’s engagement with the region. Carrillo was the primary initiator of the new Asian Triennial of Performing Arts (Asia TOPA) in Melbourne 2017, the second iteration of which will happen early next year.

Carrillo has received many accolades for his work in the arts. This includes appointment as an Officer of the Order of Australia in 2001 for services to the performing arts and Australia’s cultural exchange with Asia; being named the 2007 Victorian of the Year in recognition of his cultural and philanthropic service; and receiving the 2011 Green Room Lifetime Achievement Award.  In 2008, he was elected an Honorary Fellow of the Australian Academy of the Humanities, and in 2014, the Ministry of Culture of the People’s Republic of China awarded Carrillo their highest honour for foreigners: “The Cultural Exchange Contribution Award”, for his outstanding contributions to China’s cultural exchanges with the world.

In 2019, Professor Gantner was appointed a Companion in the General Division of the Order of Australia for eminent service to the community through professional involvement in, and philanthropic support for, the performing and visual arts, and to Australia-Asia cultural exchange. 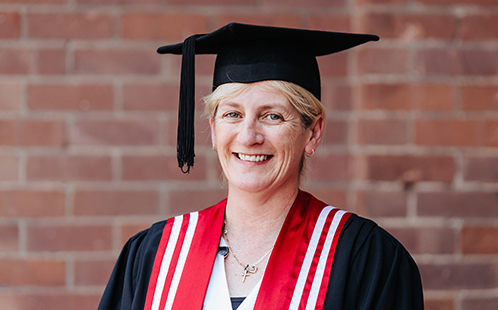 During Western Sydney University's December graduation ceremonies, a series of honorary awards will be presented to distinguished members of the community.