Count down on to World Solar Challenge 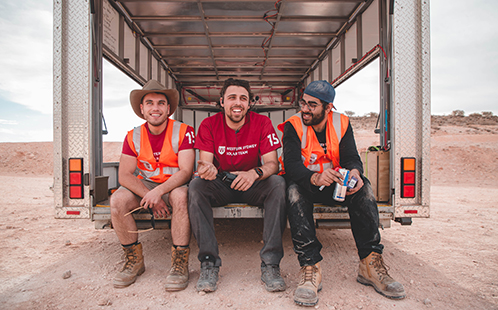 Western Sydney University’s Solar Car will soon line up on the official start line of the Bridgestone World Solar Challenge 2019.

One of eight teams representing Australia in a 50-car line-up, UNLIMITED 3.0 will begin the 3000km journey from State Square in Darwin to Adelaide at 8.30am on Sunday, 13 October.

“We are in fantastic shape. It’s been an incredible journey to get to where we are today and we can’t wait to hit the track,” said UNLIMITED 3.0 Team Manager, Max Mammone.

As part of the race, the new car was dismantled for a thorough review by officials to ensure it met race protocol, and a day out from the race, will complete in a qualifying lap around Hidden Valley Raceway to establish its start position known as dynamic scrutineering­­.

“The qualifying lap is an important milestone for us. We’re hoping to start in the top five, but with so much that can happen during the race, it’s all about a sustained effort throughout the five days or more of racing to Adelaide,” said Max.

Travelling by convoy with a special trailer housing the car, the team has already been on the road for several weeks, working together to test and perfect the car and to scout the Stuart Highway. This year, the team have travelled with two solar arrays, one for the race and one to collect signatures and messages of support on the trip up to Darwin.

“This year we really wanted a way for people to share in the amazing experience the team gets to enjoy. Thanks to everyone who signed our ‘solar cells’. So far, we’ve had more than 200 messages of support,” said Communication Lead, Grace Mitchell.

“Over the last few weeks, the team has travelled through New South Wales, Victoria, South Australia and the Northern Territory and we've been through nearly all the seasons: snow, winds and sunshine.”

Teams are anticipated to cross the finish line in Victoria Square, Adelaide, from Thursday, 17 October.

Western Sydney University’s Solar Car Team is made up of 22 students from the fields of Engineering, Industrial Design, Computer Science and Visual Communications. The students manage every aspect of the production and design of the vehicle, as well as sponsorship, marketing and the administrative elements of their involvement in the Challenge.