The aim of the program is to engage, educate and encourage men to lead healthier lifestyles.

Active Breed targets the physical, mental and nutritional health of middle- aged men in Western Sydney. From discussing physical activity and dietary guidelines to running practical demonstrations for cooking healthy food— and even provides the opportunity for men to have a run on the footy field to play against some of Bulldogs finest players.

Participants also have access to the Bulldogs inner sanctum, training grounds and gym facilities as well as mentors including former NRL players and Bulldogs coaching staff.

Dr Emma George, Senior Lecturer in Health and Physical Education at Western Sydney University introduced the Active Breed program to aid her research on education and engagement in men’s health.

After losing her father when she was a student at Western Sydney University, she decided to direct her research towards men’s health. In 2014, Dr George completed her PhD which focused on increasing physical activity and decreasing sedentary time in men. This helped inform her research on health interventions for the hard-to-reach population group.

“When gender-specific issues and approaches are used to design and deliver programs, men are more likely to engage. We have used men’s passion for sport as a way to bring them together,” said Dr George.

“To improve health and wellbeing and reduce diabetes risk in South-Western Sydney, there is a need for gender-tailored programs that appeal to men from all backgrounds.”

The 24 men who began in the first intake of the program have now become a tight-knit group, sharing their physical activity and diet tips and supporting each other throughout Active Breed. They come from a range of occupations including construction, police rescue, and corporate— with retirees also participating in the 12- week health journey.

“We recently ran a session on how to make a quick and healthy chia pudding and a few of the men were reluctant at the start but when they saw how easy it was, many of them admitted they wanted to give it a try at home. We have also delivered practical sessions on mental health, violence prevention and the important role men can play within their community, and the response to these sessions has been fantastic,” said Dr George. 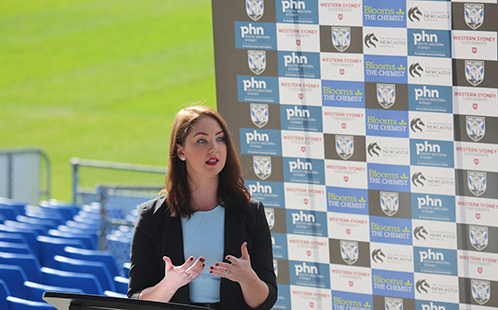 Photo: Dr Emma George from the School of Science and Health at the Active Breed Launch

The project is also an opportunity for Western Sydney University students from the School of Health and Science to gain first-hand experience in collecting research data and delivering physical activity sessions.

To evaluate the success of Active Breed at the end of the 12 weeks, Western Sydney University researchers will measure outcomes including weight, waist circumference, physical activity and dietary intake of the men as well as interview the participants, their families and program facilitators to explore the broader impact of the Active Breed program.

At the end of the program, Dr George and her colleagues will publish the outcomes and results in an academic paper to use as a reference when designing similar health programs.

“We’ve had excellent feedback from our participants and if the results of the program are promising, We’d definitely look at developing similar programs for women and families; after all, sport is something that is shared by everyone,” said Dr George.