Western Sydney University has thrown its support behind the ABC’s attempt to break the Guinness World Record for the ‘Most People Stargazing – Multiple Venues.’

Professor Miroslav Filipovic, an astronomer from the University’s School of Computing, Engineering and Mathematics says astronomy is an exciting field – and the Western campus star parties offer the opportunity have a go at being an amateur astronomer.

“Astronomy is definitely the best media to answer the questions that we have about our existence. Questions about what is happening out there in the solar system, and what is the origin of life?” says Professor Filipovic.

Dr Ain De Horta, Director of the Penrith Observatory, says light pollution of major cities and urban development can make it difficult for astronomers to see stars and other celestial objects in the night sky – but if the conditions are right, the Western star parties should provide a good vista.

“Due to the lower levels of light pollution in the western Sydney region, our university campuses are ideal locations to take advantage of the greater visibility of the night sky,” said Dr Horta.

“If it is a clear night, we definitely should be able to see Venus, Jupiter and Saturn.” 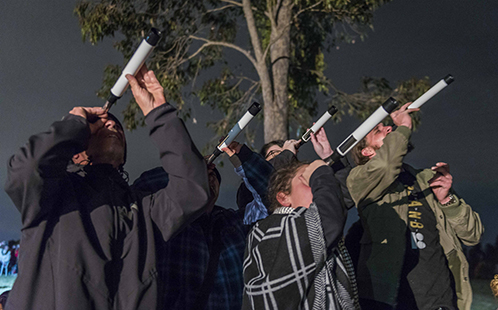 The current Guinness World Record, set in 2015 by the Australian National University, recorded 7,960 people simultaneously stargazing across 37 locations in Australia.

To qualify for the current world record-breaking attempt, star party participants will need to simultaneously stargaze at the Moon through a telescope or binoculars for a 10-minute period from one of 66 registered party locations Australia wide.

With more than 300 people expected to participate in each of the Western events – the University will be making a sizable contribution toward the broader effort of breaking the world record in 2018.

Participants are welcome to bring their own equipment, or can pre-purchase a 30mm lens telescope with small tripod at cost price for $7.15 and collect at the registration desk on the night.

For more information on the Western Sydney Star Parties and to register, visit the ABC Stargazing website.(opens in a new window)