Western's sport heats up over winter 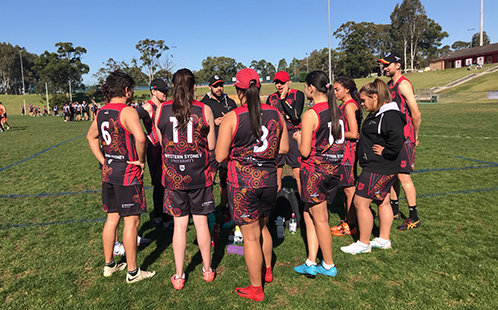 Western Sydney University students have been in the midst of some hot competition this winter.  Students from across the university have taken part in the Indigenous Nationals and the Unisport National Division 2 – formally known as UniGames.

This year the Indigenous Nationals were held in Sydney and the University fielded teams in touch football, netball, basketball and volleyball. With a contingent of 11 students the Western Sydney University team achieved great results, with a quarter final finish in netball and touch football, finishing in 11th place overall.

The Unisport National Division 2, held in the Gold Coast, saw the university field 13 teams participating in a range of sports from touch football to ultimate frisbee.  The contingent of 127 students triumphed with a gold in the mixed touch football competition, silver in the women’s water polo, tennis and men’s futsal and a bronze in Women’s futsal.  The gold or silver medal winners will now be eligible for the National Division 1 competition in 2019. The gold-winning mixed touch football team was confident going into the competition with three of the team representing the code at a national level. Team mates Danielle Davis (women’s open), Marly Simbolon (under 19’s mixed) and Zachary Bouzounis (under 19’s men’s) all represent Australia.

The Western Sydney University Kingwood campus is also be the location for the Australian Universities Pacific (AUPAC) Tournament.  The event allows students with a Pacific Islander background to come together and meet others from different states. Hosted by the University’s Pasifika Achievement to Higher Education (PATHE) program, the two-day tournament includes Oztag, volleyball and netball. The tournament commenced Monday 16 July 2018.