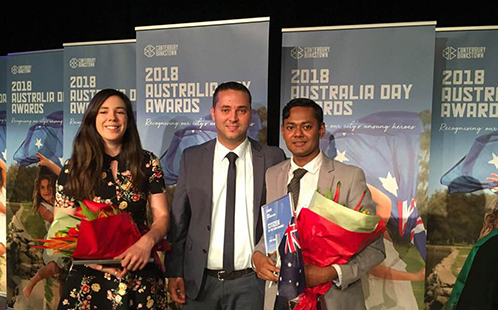 A Western Sydney University student has been named Canterbury- Bankstown’s Citizen of The Year.

Rashed Srabon Islam who is studying a Masters of Research at Western Sydney University’s Graduate Research School, was recognised for his service to the community over the past 12 months.

The Lakemba resident has devoted more than 10 years to helping Bangledesh migrants, refugees and Asylum seekers integrate in Australia.

As the son of a migrant, Mr Islam understands what it’s like to face cultural and language barriers. His work ensures that people get access to important services like English classes and health insurance.

The 31-year-old is a reporter for NTV news and Bangla Barta newspaper and has also established a local youth cricket and badminton teams for young men. As part of his community work, he also helped establish a domestic violence support group for women.

The awards, which were hosted by Bankstown Council, were presented as part of an Australia Day service at Bankstown’s Bryan Brown Theatre.