It’s been a flying start for the Western Sydney University Solar Car team who have won the first stage of American Solar Challenge — a global event with competition from all over the world. The team began their 2,800km solar feat on July 14 and are racing from Nebraska to Oregon in four stages and across four American states.

The first stage involved a distance of 773 kilometres. The WSU crew, working very long days and with little sleep, pushed themselves and the car, UNLIMITED 2.0, to the limit – beating main rival Michigan State University by just less than three minutes.

If the tough competition isn’t enough, the solar team are also racing in sweltering conditions, which has even seen a number of teams abandon the track and pull out from the race. The current result is credit to the team work of students, alumni and volunteers from Western Sydney University's School of Computing, Engineering and Mathematics who are thoroughly checking the reliability of all on-board systems of UNLIMITED 2.0 in real world driving conditions.

The Formula Sun Grand Prix is a track event that is held on grand prix or road style closed courses. This unique style of racing truly tests the limits of solar cars in handling curves, braking, and acceleration. But this has been an easy feat for the WSU solar car team who have managed to stay in the front pack of the race.

The Challenge began with 23 teams from across the globe but it seems that Western Sydney University’s biggest rivals are America’s University of Michigan, Massachusetts Institute of Technology and University of California, Berkeley. 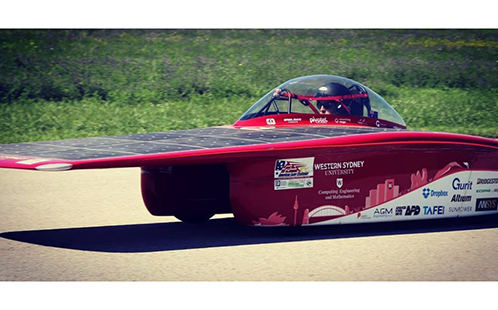