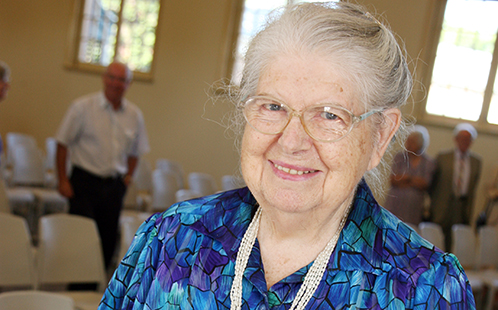 It is with sadness that Western Sydney University acknowledges the passing of Freda Leslie Whitlam AM, who passed away on 30 May at the age of 97.

Freda Whitlam was the beloved sister of former Prime Minister, the Hon. Gough Whitlam AC QC. Like her brother, Freda maintained a strong commitment throughout her life to public service and to education.

Freda was Principal of Presbyterian Ladies College Sydney from 1958 to 1976. She was also a prominent and influential member of the Uniting Church of Australia and supported the establishment of the University of the Third Age (U3A).

The University is home to the Whitlam Institute – a dynamic public policy institute that commemorates and is inspired by the life and work of Gough Whitlam. The Female Orphan School building at the University’s Parramatta Campus, where the Institute is based, houses the Whitlam Prime Ministerial Collection as well as the Margaret Whitlam Galleries. In 2009, the Whitlam Institute co-hosted the launch of a biography of Freda Whitlam, authored by Noelene Martin and launched by Barry Jones.

Freda Whitlam will be greatly missed. On behalf of the Board of Trustees and the broader University community, I extend our sincerest condolences to the Whitlam family.