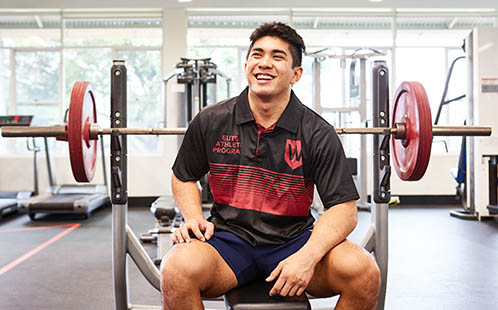 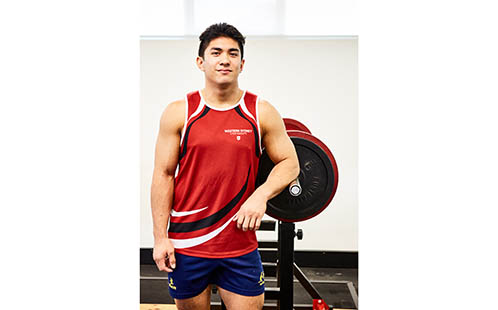 Western Sydney University will cheer on three of its students, who are tipped to be medal contenders in the 2018 Commonwealth Games.

Western students Ridge Barredo, Brittany O’Brien and Timothy Anstee will represent Australia in events as diverse as weightlifting, diving and the Rugby sevens.

Bachelor of Nursing student and recipient of 2018 Western Sydney University’s Sports Scholarship, Ridge Barredo, will compete in the Men’s 105kg category in weightlifting.

Since 22-year-old Ridge began weightlifting in 2015, he has competed in the Asian Indoor Games, the 2016 Olympic Trials and the 2015 Commonwealth Championships.

“I’m looking forward to the experience the most. This will be the first time I’ve competed in an event of this calibre,” says Ridge.

Ridge is in the second year of his nursing degree, which he studies part-time under the University’s Elite Athlete Program in addition to juggling a rigorous six day a week training schedule and a casual job at Woolworths.

Ridge plans to continue the juggling act when he graduates, as he intends to pursue a career in nursing while at the same time hoping that his performance in the Commonwealth Games will give him the chance to qualify for the 2020 Olympics.

“It’s good to have the support of the University to help me pursue my dream. They’ve made it achievable to pursue my goals and still be able to study throughout the year.” Tim was first selected to play for the Australian Rugby sevens team in 2016. After two seasons representing Australia all over the world, Tim will now join the Commonwealth Games team.

“It’s a special tournament and certainly one of the biggest ones I’ve had the chance of being a part of,” says Tim.

“It makes you want to perform your best because you’re on home soil and the whole nation will be watching.”

Tim studies part-time as at Western, attending evening classes at the University’s Parramatta campus. He hopes to work in the elite sporting management industry after pursuing his rugby dream.

“I like having the balance of university and sport. It keeps me busy and means I don’t just have to focus my attention on one thing,” he says.

19-year-old Bachelor of Design (Visual Communications) student, Brittany O’Brien, is set to make a splash in the Women’s 10m platform diving category at the Commonwealth Games.

Brittany has been diving for 10 years. She was asked to replace an injured diver in the Australian Olympic squad during the 2016 Rio Olympics – reaching the semi-finals whilst at the same time completing her HSC and securing a place at Western.

“As well as being a diver, I’m also passionate about design – which is why I chose to study it at university. I would love to have my own clothing line and since I live in swimwear and gym clothes, I want to start with designing active wear,” says Brittany. 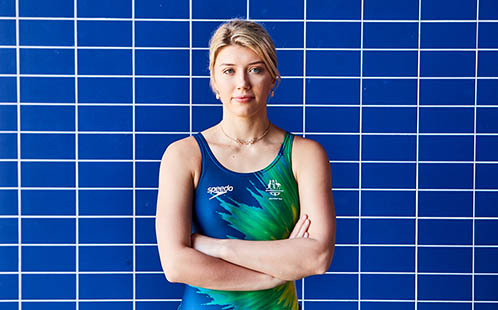 Ridge, Tim and Brittany are well prepared for the Commonwealth Games. Collectively, the trio are training more than 70 hours a week in the lead up to the event.

Ridge follows a strict diet, stretches for half an hour, and trains for five hours each day to prepare for the Games. Tim has been training full time with 6:30am wake up calls, and Brittany trains four mornings each week at the gym and five afternoons in the pool.

The Commonwealth Games will be held on the Gold Coast and will begin on the 4th April, 2018.