West Syd U, on your feet, let’s repeat! Can our NSW State Champions from Western Sydney take out another National Championship? 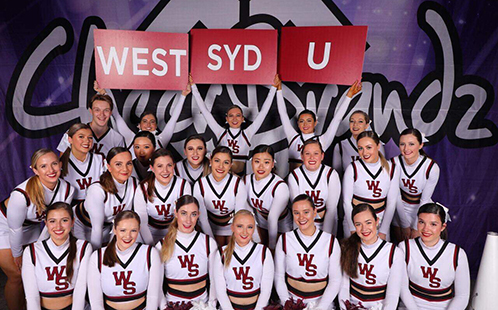 Western Sydney University Cheerleading Club is proud to be sending 36 athletes to compete at the Australian Allstar Cheerleading Federation (AASCF) National Cheer & Dance Championships this weekend, who will be competing against over 12,000 competitors from over 1700 registered teams across Australia at the Gold Coast Convention & Exhibition Centre on 23-25th November 2018 for the coveted title of National Champion.

Representing the University Division of the AASCF National Championships, Western Sydney University has two qualifying teams who will be competing at this year’s premier Australian Cheer and Dance competition.

The Western Wildcats, a Level 2 Co-Ed University Division team comprising 22 female athletes and one male athlete remain undefeated, taking out back to back first place National Champions at the 2017 and 2018 UniSport Nationals Divison 1 competitions, and securing their place as AASCF NSW State Champions at the State level competition earlier this year.

Heading into the AASCF National competition as NSW State Champions to face off against 11 other fierce university squads in their division from all around Australia, the Western Wildcats have been putting in the hard work and determination required to get the job done and to “hit zero” – the ultimate goal of all cheer athletes, which means to achieve a perfect routine with zero point deductions.

The Western Wolves, a Level 1 All-Girl University Division team of 13 athletes, are a newly formed team who made their competition debut for Western Sydney University Cheer this year - are already making waves having taken out the 2018 Cheerbrandz National Championships.

Ms Kirrilee Barlow, Treasurer of Western Sydney University Cheer Club says both the Wildcats and Wolves squads are determined, focused, and ready for the main event this weekend.

“Training in the lead up to Nationals has been treated very much like the warm-up room at comp would be. We go through all elements of our routine to warm up our stunts, pyramid, chant and tumble. We train for two hours a week at local cheer gyms with sprung floors to ensure we are competition ready”, says Ms Barlow.

“Our club only formed last year, so it would be a dream come true to win AASCF Nationals, it’s what everyone works so hard for all year”, she said.

All Star cheerleaders do not cheer for other sports teams.... They are the TEAM!

All Star cheerleading is a competitive sport that involves both females and/or males performing a two minute and 30 second routine composed of stunting, pyramids, group tumbling, jumps and a dance break. This routine is performed and scored against other competitive teams at competitions.

All Star competitions are an incredibly exciting and social event where sports combine with theatre as All Star Cheerleading and Dance, perhaps more than any other sport, is judged not solely upon the sum of its parts, but on the overall entertainment value of superior technical athleticism combined with creative presentations.

The Western Sydney University Wildcats and Wolves will be competing at the Australian Allstar Cheerleading Federation’s National Cheer and Dance Championships this Saturday at the Gold Coast Convention and Exhibition Centre.