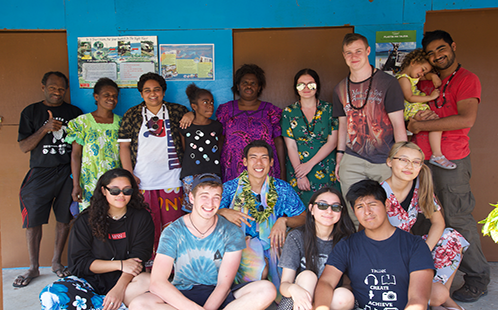 The Pacific island nations are at the frontline of climate change, battling with rising sea levels, more extreme weather events and their consequences including cyclones, tsunamis, storm surges, coastal flooding, and landslides. Two teams from Western Sydney University travelled to Vanuatu, ranked as one of the world’s most at‐risk countries to live in, to showcase the personal stories of the people directly affected by climate change and their coping strategies.

For this project, 10 undergraduate communication and media students and their academic supervisors spent 4 weeks in villages in North Efate and the islands of Nguna-Pele and captured their experience in two thought-provoking short documentaries. The short films tell the stories of local environmental champions who are monitoring the health of their reefs, growing coral, developing climate resilient crops, fighting the use of plastics and educating children in their communities.

“Everyone we met told us how climate change is affecting their lives and their culture” explains Dr Tanya Notley, Senior Lecturer in the School of Humanities and Communication Arts. “Some people told us that the place their grandfather fished all his life was now underwater. Others said they can no longer grow the food they used to at the same time of year. We were also told that important ancient cultural practices have had to be adapted because animal specifies, like birds, needed for these practices no longer come to the community at the same time of year or even at all.”

Associate Professor Juan Salazar, Research Director, Institute for Culture and Society: “With this project we wanted to create films that would amplify the voices of people fighting on the frontline of climate change in the Pacific. These stories are surprising and they are also really inspiring. We’ve learnt that it is vital that we are not overwhelmed by the challenge of climate change in Australia. We can take action and we can learn from people in Vanuatu who are already doing that with far fewer resources.”

One of the key things the staff and students say they learnt on the trip was about the deep and complex connection between the environment and culture. One of the films created by the students explains that the ancestor’s graveyard on one island is in the process of being washed away as a result of the sea level rising, while the other talks about the ongoing environmental and psychological impact of Cyclone Pam.

This filming initiative in Vanuatu provided students with the opportunity to learn from local volunteer environment champions working at the grassroot level as part of a nation-wide program led by the Vanuatu office of the Australian non-government organisation Live & Learn. Established in 1992, Live & Learn aims to reduce poverty and advance sustainable development in the Pacific Region.

Western Sydney University (WSU) is a leading provider of education on sustainability science and sustainability communication with an increasing number of degrees and courses now focused on these topics. As part of this focus, Western Sydney students are provided with a range of opportunities to learn from sustainability industry leaders, both in Australia and internationally.

The Vanuatu trip was supported by funding from the Department of Foreign Affairs and Trade New Colombo Plan initiative which aims to increase student’s knowledge of the Indo Pacific region.

Taking a positive step in engaging and empowering millennials and their communities with the issues of a changing climate, Western Sydney University has launched a new online community, Earth IQ. Through multimedia storytelling, expert commentary and activations, Earth IQ is a way of inspiring a generation to embrace more mindful and sustainable living - one carbon footprint at a time.