People from across Greater Western Sydney had the opportunity to participate in the ABC's national attempt to break the Guinness World Record for the ‘Most People Stargazing – Multiple Venues.'

On the evening of Wednesday 23 May 2018, Western Sydney University hosted three separate ‘Star Parties’ on its Parramatta, Penrith and Campbelltown campuses.

At Penrith and Campbelltown, the events were held at the University’s on campus Observatories with the volunteer assistance of local astronomical societies. At the Parramatta South, the front-lawn of the campus was transformed with a big screen, neon lights and an on-site food truck into a festival fit for amateur stargazers. 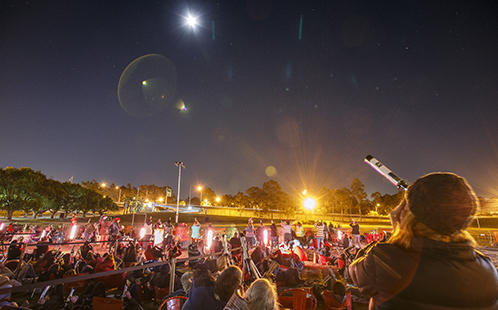 Dr Nick Tothill, an astronomer from the University’s School of Computing, Engineering and Mathematics, was the MC at the Parramatta event and provided guests with a guided tour of the night sky – pointing out visible constellations and the location of Saturn from an ideal vantage point in western Sydney, relatively unaffected by light-pollution.

At approximately 8:35pm, the official World Record Attempt commenced and all telescopes and binoculars were trained on the moon for ten minutes.

With hundreds of people participating at each Western Sydney University venue, the community made a significant contribution to the national tally – which, at over 40,000 participants stargazing from more than 66 locations Australia-wide, shattered the original Guinness World Record of 7,960 people simultaneously stargazing.

To celebrate the great accomplishment, stargazers at Parramatta rounded out the night in spectacular fashion. Captured by an overhead drone, the Parramatta participants shone the lights of their own personal devices into the night sky, forming their own human star formation.