Sore losers forgetting the importance of grace in defeat

The following opinion piece by Dr Andy Marks, Assistant Vice-Chancellor of Western Sydney University, was first published in The Daily Telegraph (opens in a new window) 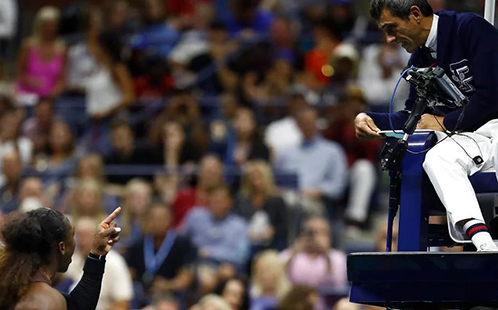 Defeat is a truer test of character than victory. Whether it’s the US Open or Australian politics, the way participants deal with failure impacts the contest overall, with implications well beyond a moment of madness.

“I’m sorry it had to end like this”, a tearful Naomi Osaka felt compelled to say to a booing New York crowd, seething at the circumstances of her straight sets defeat of Serena Williams. Turning to her opponent, Osaka added she was “really grateful” to be able to play her hero in the women’s singles final.

This outcome is emblematic of a wider shift in tone emerging in sport and, of late, politics. Rivals in both pursuits are forgetting the importance of grace in defeat. How we deal with losing is vital in preserving confidence in the contest itself. Tennis will recover, and Williams too, might reflect on her behaviour in time. Politics, however, shows scant signs of improvement, even among the victors.

Hearing an umpire labelled a “thief” is perhaps an inevitable spillover from a political culture that renders people with contrasting views as “crooked”, “fake” or “failing”. Incrementally, these crude political tropes are challenging what is deemed permissible in sport and in civil society.

The temptation to blame others for the anger and disappointment she said voters were feeling was too difficult to resist for NSW Premier Gladys Berejiklian. Picture: Richard Dobson
In many respects, Australia were first-movers in this drift towards corrosive public discourse. We saw it in parliamentarians implicitly endorsing the “Ditch the witch”, and “Juliar” discord that plagued Julia Gillard’s prime ministership.

We heard it in descriptions of thwarted Liberal leadership contender, Julie Bishop as “Lady Macbeth”. And we see it in the Canberra spill wash-up where the pervasiveness of bullying is the only element competing camps agree on.

Where do we go from here? Unchallenged, the ante will be upped. Notions of fair play, respect and honesty, mourned in the passing of figures like John McCain will be diminished. But some signs of pullback are emerging.

The morning after Williams’ loss, another beaten contender, NSW Premier, Gladys Berejiklian fronted the press. Wagga isn’t New York, but the sting of defeat can focus the mind. Under Berejiklian’s watch, the Liberals had just lost a seat that had been in her party’s hands for 60 years. She obviously expected a different result but didn’t resile from the reality.

Not once during post-match proceedings did Serena Williams acknowledge she’d simply been outplayed. Picture: AFP
“I accept [the] message” she told voters who delivered a nearly 30 per cent swing against her.

She drew on sporting grit, promising she and her colleagues would, “work their guts out” to win back voter respect. Her deputy, John Barilaro vowed to “get real”. “Blokes”, he pledged, would “get rid of our ties”, and women “start wearing jeans”. Possibly court violations, but you get the picture.

Even while the Premier was showing signs she understood, the temptation to blame others for the anger and disappointment she said voters were feeling was too difficult to resist. The behaviour of the former member, Daryl McGuire and exacerbation at the Canberra spill, she observed must take some of the blame. Perhaps, but there’s also the possibility career politicians were simply outplayed by an amateur who’d heard voters were fed-up with politicians talking about themselves.