Public housing ban on people with drug records likely to do more harm than good, research tell us

The following article, authored by Dr Kev Dertadian from the School of Social Sciences and Psychology, was first published with full links on The Conversation.(opens in a new window)

The New South Wales government plans to ban people with a history of drug offences from living in social housing in parts of inner-city Sydney. The desire to provide an environment that helps people who are trying to minimise their drug use and stay away from drug markets is understandable. The reality is there is no evidence that this is what the policy will achieve.

The policy involves a one-year trial in which anyone charged with or convicted of drug dealing or manufacturing in the past five years will not be allowed to live in public housing estates in Surry Hills, Glebe, Waterloo and Redfern. The state’s minister for social housing, Pru Goward, told ABC Radio the aim is to reduce temptation for drug users living in these estates.

Once a person is released from prison on drug offences, it’s the first five years that are critical in keeping them away from crime.

Helping rather than punishing people

Let’s start with the minister’s first claim, that the purpose of the policy is to help people experiencing problems with their drug use. Research tells us that the most effective approach to reducing the harms of drug use involves environments in which:

Underlying this well-evidenced and highly effective approach is this basic principle: the way to reduce the harms of drug use is to help rather than punish people who experience problems with their drug use.

In Australia, though, less than half of the people who are suitable for and seek out treatment actually receive it. This is the most significant barrier to improving outcomes for people who have problems with drugs. It needs to be the first priority of policy and funding.

Policies like the one being adopted in NSW threaten to undermine this evidence-based approach.

In my research I’ve learnt that people who sell drugs often also use them. I’ve seen how selling drugs in inner-city areas is more likely to be done out of desperation than out of greed or malice. Just like we need to help people whose drug use leads them into desperate behaviour, we need to help people with previous drug convictions to find stable living arrangements and legitimate sources of income.

What you want is a way for housing projects to be safe. Some restrictions based on real safety make all the sense in the world, but you want those restrictions to be reasonable, and you want people to be able to earn their way back in. 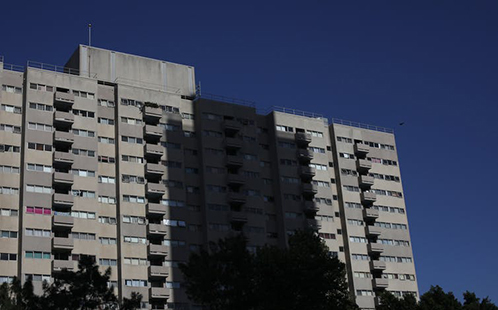 The people barred from public housing in inner Sydney will still need housing and a legitimate source of income. mic wernej/Flickr, CC BY-NC-ND

Stable housing is enshrined in human rights law as an essential principle for human survival and dignity. This means the government still has obligations to house the people it forces to move out of the inner city.

The people affected by the policy have already served their time. Barring them from public housing in the inner city sends the wrong message by further punishing and marginalising people who have already been dealt with in the proper way; that is through the criminal justice system.

The policy also gives the impression that people with previous drug convictions are not good enough to be housed in the trendy suburbs of our inner city, but they can be housed elsewhere.

Community groups and organisations that help to reintegrate offenders into the community have raised valid concerns about the discriminatory impact of the policy. They have warned that it will have disproportionate impacts on Indigenous Australians, who make up about 25% of people released from prison who live in the affected areas. While the policy may not be targeting Aboriginal people, its outcomes are likely to include significant disruption of their families and communities.

People need to be given the opportunity to rebuild after the criminal justice system has intervened. The last thing they need is to have to manage constant, ongoing and disruptive changes to the systems of support attached to social networks and family, and the community of caring for one another that they provide.

Heed the lessons from elsewhere

It’s not as though we haven’t seen policies like this before. The NSW approach mimics aspects of US drug policy, which has sought to deny a range of services, including welfare and access to public housing, to people with drug convictions.

Crucially, the evidence from the US and elsewhere shows that denying or limiting access to social services of people with previous drug convictions may make it more likely that they will reoffend.