The following opinion piece by Professor Joanne Orlando from the School of Education, first appeared in The Conversation. 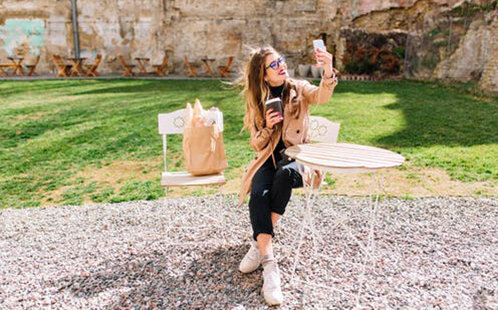 (open in a new window)Fake Instagram accounts, often referred to as “finstas” or “spam accounts”, have become the norm for many teens – but their reasoning for creating these is not as sinister as you think.

I’ve spoken with 50 Australian families – including 118 children aged 1-18 – about technology use, and am currently conducting a follow-up qualitative investigation with a further 25 teens about their social media use. The data for both studies will be published this year.

My investigations show that teens’ use of social media is constantly shifting in new ways in response to changes to social media platforms, the teen’s age and social context. Social media continues to be a significant aspect of adolescence; the right information and guidance will ensure that use is positive and healthy.

Among my sample, teens often have access to multiple devices that usually include a mobile phone and a laptop. They typically dedicate their laptop use to school work, and their mobile phone use for all other parts of their life – such as socialising, connecting with family, and following interests. Teenagers also use their phones for some aspects of school learning, including accessing school resources, information and connecting with class peers.

Instagram is the most popular social media platform for teens: data from the United States shows that about 76% of this age group use it regularly. My current research shows that on any given day, a teen accesses Instagram around 10-30 times. They check likes, comments, share stories, view their friends’ latest posts, and follow their interests.

The rise of the finstas (sometimes referred to as “privates” by teens) began in 2017 when for the first time, Instagram allowed users to create and switch between multiple accounts. Unlike other social media platforms such as Facebook, which states “it’s against Facebook Community Standards to maintain more than one personal account”, Instagram has embraced multiple accounts. Since that time teens have also embraced them, with ownership of numerous “alternate” accounts now common for this age group.

Teens do not typically set up finstas in their own name, but instead use a fake name or the name of an entity such as their favourite character. The idea is that the accounts cannot be traced back to them.

Three ways teens use fake Instagram accounts
Adults may be inclined to assume that finstas are created by teens to hide scandalous and/or overtly sexual behaviour. However, that’s not necessarily the case. Growing up in the social media era, members of this age group are acutely aware of the pressures on them to create and maintain the picture-perfect online profile. Finstas are often strategically used by teens to relieve this pressure.

Private, less visible accounts allow teens the opportunity to move away from the carefully cultivated, public persona on their real Instagram account – and present a rawer, “this-is-the-real-me” personality to a smaller group of closer friends.

The friends that teens select for each of their finsta accounts depends on the type of content they want to post on there.

There are at least three reasons why teens create finsta accounts:

1. For their real friends
Teens commonly create finstas as a space to show their silly or more vulnerable side with close friends, without being judged by others. It is not uncommon for teens to have thousands of Instagram followers (many of whom they don’t know personally), and the potential for criticism on such accounts is rife.

A finsta account however may have less than 30 of their close friends. In my own study of teen use of social media, 17-year-old Tommy stated he used his finsta account to post funny pictures just for his friends. He said he would never post those pictures on his real Instagram because he wouldn’t want everyone to see how goofy he can be.

2. To enjoy private interests
Some teens use finsta accounts to privately enjoy interests they feel others may judge them by, or bully them about. For example, a teen boy may be an avid fan of a TV series that primarily has a female fan base. The teen may use his finsta account to share his interest with like-minded fans, he may even set it up to give the impression that it is a girl’s account. With this purpose, teens can feel free to enjoy their interest, or try new ones, without being worried that someone will mock them.

3. To boost their own popularity
Teens may also use finstas as a way of boosting their real Instagram accounts, for example using them to likes posts or add flattering comments as is seen with YouTube activity.

Implications for teens
A benefit of finstas is that they allow the focus of teen’s social media use to shift in a positive way. They can move away from posting perfect photos, and garnering high likes and quick compliments, to a focus on presenting themselves and their ideas in a less edited and more authentic way.

Their use of these accounts can potentially give teens more control over their digital identity, protecting themselves from users viewing and possibly misinterpreting their posts.

It also allows teens to get more perspective on what their friends are doing, especially after combining the information from their “official” accounts and their more authentic finstas.

On the flipside, however, these accounts usually engage with a closed circle of friends, so inappropriate content – such as sexual or highly intimate remarks and posts – can (and does) get posted.

Semi-anonymous and closed-platform posts also bring the potential for bullying, sexting, revenge posting, illegal activity and amplified drama that can easily spill over from finsta into other social media accounts and real life.

Parent-child conversations
Conversations with teens about social media are always important and should be a regular part of digital life.

Open conversations between parents and children can build a healthy digital existence.  from www.shutterstock.com
As finstas are generally set to private mode, teens may feel protected – that what they post is private. However, it’s important to remember that the same rules apply to finstas as to all social media: there is no way to monitor who physically sees a post.

A private setting does not protect you from a screenshot being taken of the post and distributed – nor does it stop someone that you’re not “friends” with physically looking at content on your account, perhaps on another persons’ phone.

Additionally, you are always trackable online somehow. Even if you are using an alternate username, a screenshot of the post may still be tied to your name in a Google search result.

Whether real or fake accounts, the message to teens about social media should consistently focus on always being in control of your own reputation, sharing things online that reflect the real you, and thinking of the long-term implications of posts. Real or fake accounts – the rules stay the same.