Exceptional women named in the 2018 Women of the West Awards 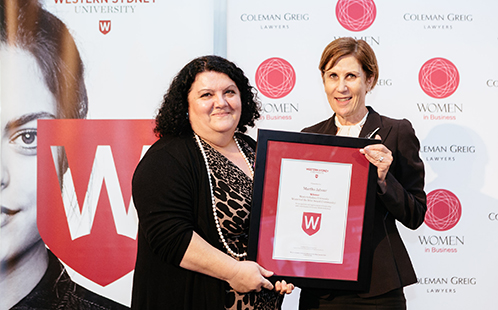 Western Sydney University has announced the winners of the 2018 Women of the West Awards.  The two inspirational women have been chosen for their invaluable contributions to the community and business.

The University presented the awards at an International Women’s Day luncheon hosted by the Coleman Greig Women in Business Forum.

Western Sydney University’s Deputy Vice-Chancellor (Academic), Professor Denise Kirkpatrick, congratulated the winners and all the nominees for this year’s awards, and said they are inspiring role models who are all passionate about making a difference.

“When the University established the Awards in 2005 it was to acknowledge and celebrate the many women who exemplify leadership and commitment to improving the lives of people in our communities.” says Professor Kirkpatrick.

“As we celebrate another year of outstanding nominees, we should be encouraged to reflect on what their work means. The passion, commitment, and drive to make a difference exhibited by the women here today is truly inspirational.”

"It's great to be able to share the amazing and often unspoken contributions that every nominee, and in particular our winners here today, are making for the good of the wider community," she says. 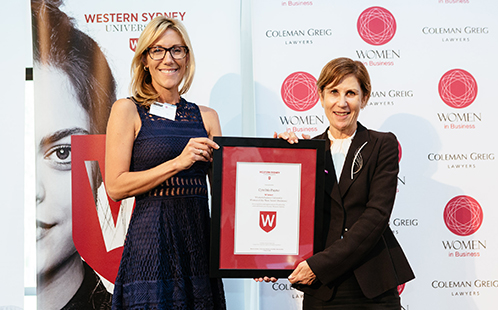 Cynthia Payne, Woman of the West (Business), has been the chief executive officer of aged care support organisation SummitCare for the past 15 years. During her tenure, Ms Payne has helped to lead a number of aged care partnerships with countless multi-cultural communities. She also volunteers and passionately supports the Lucy Mentoring Program.

Martha Jabour, Woman of the West (Community), has been instrumental in her advocacy for justice.  As the Executive Director of the Homicide Victims Support Group for the past twenty-four years, Martha has made significant contributions to family and community support, education, and legal reform for those dealing with homicide and traumatic crime.

Further information on 2018 Women of the West Award Winners

Cynthia Payne, has been the chief executive officer of aged care support organisation SummitCare for the past 15 years. Her application impressed the selection committee with her leadership, determination and business acumen.

During her time at SummitCare Ms Payne has helped to lead a number of aged care partnerships with countless multi-cultural communities. she also oversees the Fusion program which brings students from Canley Vale and Liverpool Boys High Schools with the elderly for inter-generational programs with great benefit to both.

Ms Payne also has a passion for mentoring young Western Sydney women. Through the Lucy Project she helps to play a supporting role in developing their careers and also trains to train new mentors for the project. She also last year joined the national board of the Heart foundation and spends countless hours volunteering within the community.

Martha Jabour has been instrumental in her advocacy for justice. As the Executive Director of the Homicide Victims Support Group for the past twenty-four years, Martha co-ordinates and develops activities including counselling programs for families of victims. The Group has now worked with over three thousand families with the goal of supporting, educating and initiating reform in laws relating to victims.

Martha’s dedication to the needs of victims’ families. Among the list of volunteering she does, Martha has given comfort to families at morgues by assisting them prepare for their infant’s burial. Her natural sensitivity with grieving families has also allowed her to deliver seminars to every detective across NSW at Goulburn since 1994.

Martha also personally runs an advanced Education program for the senior investigators and Homicide Detectives of the NSW Police Force in order to highlight the needs of family victims. She also developed a major initiative to establish a world-leading residential trauma support centre in Greater Western Sydney, Grace's Place, for children affected by homicide.

As an advocate for the community, Martha holds a position on the NSW State Parole Authority, ensuring the community has a voice when releasing offenders. She has also held positions on a number of committees including the Victims Advisory Board, Domestic Violence Death Review Committee, Unsolved Homicide Review Committee and the Sentencing Council of NSW.