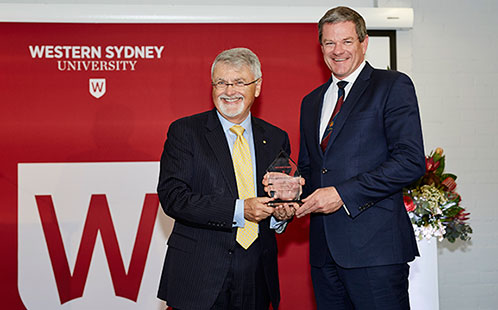 Western Sydney University is proud to announce David Goodfellow as the 2018 Hawkesbury Alumni Award winner in recognition of his stellar achievements in Australia’s agricultural industry.

Even back during his days at Hawkesbury Agricultural College, David Goodfellow gained himself a reputation as being a smart, entrepreneurial and talented people manager, running the campus bar with nearly 30 students working for him. Since then, David has built an incredible career in Australia’s leading agricultural businesses and created billions of dollars of corporate value and thousands of jobs in a rapidly-changing industry. In 1992, David was awarded the prestigious E.A. Southee Scholarship to pursue his Masters in Applied Science (Agriculture), a scholarship that enabled David to further develop his leadership and technical skills in agriculture.

The impact of David’s leadership is reflected in the statistics of some of the companies with which he has been involved. These include companies like Aroona Farms in South Australia, where more than $120 million has been invested into some of the world’s most productive almond orchards. Or, Paraway Farms, where in 2008 David transformed Macquarie Bank’s initial farming investment into a corporatized company worth hundreds of millions of dollars that manages more than 4.5 million hectares of land and produces more than 20 million kilos of prime beef every year.

David’s leadership and impact reflects the early values he brought to student life at Hawkesbury, characterised by values of respect, collegiality, loyalty and empathy. Coupled with David’s insatiable thirst for education and proven ability to lead successful teams on complex investment projects, David has become one of the foremost corporate leaders in modern Australian agriculture.

“When I look back on my career, the same values that have provided me with so many amazing experiences were there at Hawkesbury even at the start. Success is driven by fairly basic fundamentals: respect and care for your colleagues, dedication and commitment to your cause, and a spirit of optimism that sees you through the darkest days,” David explains.

David’s careful stewardship has guided the organisations he has managed through some very difficult times, not least the current drought which is affecting most of the east coast. His infectious enthusiasm and optimism for Australia’s agricultural future has helped to inspire his people through immense challenges, such as the turnaround of Elders in 2011. At that time, David was brought in to turn around a struggling brand, beset by financial and organisational challenges.

“His ambition and vision to shape agriculture has delivered enormous benefits to Australia and opened up new opportunities to take Australian produce to the world. David’s commitment to excellence, his passion for people and his commercial acumen make us proud to celebrate his achievements with the well-deserved Hawkesbury Alumni Award for 2018”.

David was presented the award at the annual Hawkesbury Luncheon, held this year on campus to celebrate the enduring legacy of Hawkesbury’s new generation of young agriculturists entering the next phase of Australia’s innovative, agricultural tech-driven future at Hawkesbury.