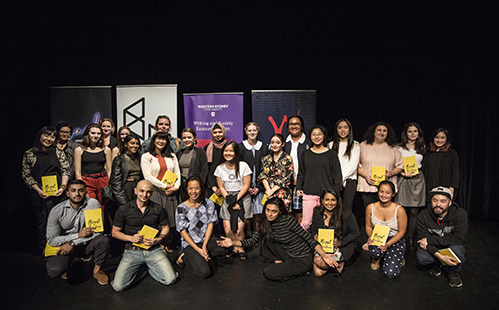 For the past ten years, young writers from South West Sydney have taken part in the Canterbury-Bankstown Youth Week Creative Writing Competition. To celebrate this decade-long creative project the best entries from the competition have been published in the anthology, Bent not broken: 10 years of creative writing from Canterbury-Bankstown.

The publication, produced by Sweatshop – a partnership between the University’s Writing and Society Research Centre and Westwords, a Western Sydney Literary Development Organisation – in partnership with the City of Canterbury-Bankstown and Create NSW, presents a generation of award-winning stories from the backyards of South-Western Sydney.

This year’s winner, Sefton teenager Donna Wilson, says she was beyond appreciative of the recognition for her piece – a poem about struggling to connect with her grandparents’ native language.

“It’s so cool the judges enjoyed reading my entry and thought it was worthy of the win. It’s a topic that’s really personal to me,” says Ms Wilson.

“Our City was so accurately represented – from the issues discussed, to the cultures and religions represented, and even the entries’ genres,” says Dr Ahmad.

“This is the first year we’ve had an entry submitted in an Indigenous language – it’s also the first time we’ve had science fiction entries take out two of the top spots!”

Canterbury-Bankstown Mayor, Khal Asfour, emphases the importance of this on-going competition and partnership, saying: “Youth Week, and in particular our creative writing competition, is about providing a platform for freedom of expression for our local youth,” says Mayor Asfour.

Bent not broken: 10 years of creative writing from Canterbury-Bankstown has been funded by Create NSW and the Packer Foundation. It is available for purchase at Sweatshop.ws