Bashar Hanna, founder of music therapy groups The Choir of Love and The Peacemakers, has been named a Community Fellow at Western Sydney University’s September Graduations.

Mr Hanna has made a significant contribution to the western Sydney region, working closely with the refugee and migrant community as an Arts and Community Development Consultant.  Through the power of music and creative arts, his music therapy initiatives support healing, language development and social inclusion for refugees and newly-arrived migrants.

The Community Fellowship is awarded to distinguished individuals who have made a particular and sustained contribution to enhancing the social, economic, cultural, environmental or technological development of the Western Sydney region.

It is Mr Hanna’s love of music which has spread throughout south-west Sydney that has given him the community fellow accolade. After investing his life savings into opening Fairfield’s Arts and Community Development Centre in 2014, Mr Hanna introduced communal arts based projects including the Choir of Love, which has now expanded into two teams - the original choir  and the Peacemakers Ensemble, a multi-faith, multi-gender and multicultural group.

The Choir of Love works in partnership with the NSW Service for the Treatment and Rehabilitation of Torture and Trauma Survivors, an organisation that provides counselling and community development support for refugees experiencing trauma. Together they have developed a range of joint community projects to attract people from all refugee backgrounds to come together and sing for love and peace. Notable among these initiatives is the Song of Peace project, which brought together more than 2,000 people of diverse backgrounds across Western Sydney.

Mr Hanna was born in Iraq and in 1992, graduated with a Bachelor of Science in Building and Construction Engineering at the University of Technology, Baghdad. After moving to Australia in 1998 following the political and civil unrest in Iraq, he became Fairfield City’s first Arabic speaking real estate agent.

This is when Mr Hanna’s passions of helping the community were realised.  As the number of refugees from Arabic-speaking countries grew dramatically in South-West Sydney, he became a member of the community they could trust, who spoke their language, and understood their culture. 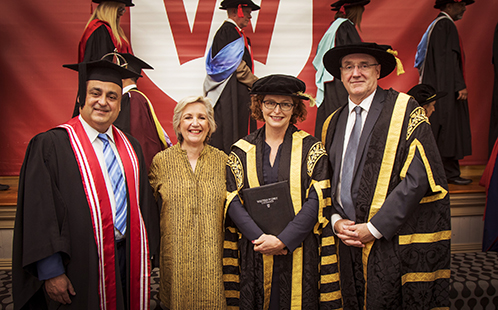 Mr Hanna went on to study at Western Sydney University, receiving a Postgraduate Diploma in Adult Education. He joined the then Department of Immigration and Citizenship as a Case Co-ordinator in its Integrated Humanitarian Settlement Strategy Program.

For the next three years, Mr Hanna worked with newly-arrived refugees, becoming increasingly aware of their struggles – the language barriers, social exclusion and cultural differences. He was deeply moved by the stories of profound trauma that many refugees had lived through and the way that these experiences had continued to haunt them.

With a case load of more than 100 clients and just six months to work with each, he was frustrated by how little agency he had to make a difference. This motivated Mr Hanna to return to pursue further studies, and in 2011, he graduated again from Western Sydney University with a Masters in Social Science.

He then joined the Department of Education and Communities as the Community Liaison Team Leader at Prairiewood High School, where he is a much-loved colleague, and confidant and champion of the migrant and refugee students of the school.

Bashar Hanna was chosen as a Community Fellow by Western Sydney University’s Board of Trustees and was presented to the Chancellor at Thursday’s graduation ceremony.

No results were found