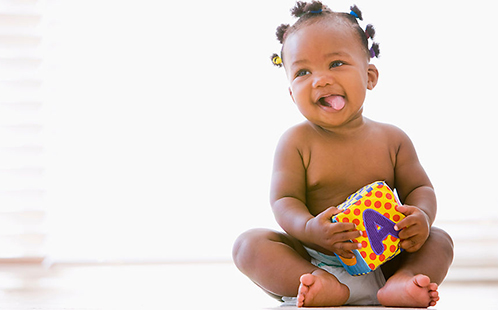 New research has found that Australian babies fare better than babies of other English speaking countries at word learning.

At just 17-months-old, infants with Australian English (AusE) as their native language can already encode highly dynamic acoustic properties in speech, enabling them to distinguish subtle differences in words that differ by only a single vowel sound. For example; “sheep” and “ship”.

This research follows on from a previous study (opens in a new window) that found AusE infants at 15-months were better at detecting vowel changes in Canadian English than Canadian babies of the same age, but at times seemed baffled by Australian vowels.

To solve this puzzle, Associate Professor Paola Escudero (opens in a new window) from the MARCS Institute for Brain, Behaviour and Development, Western Sydney University (opens in a new window)- a specialist researcher in the fields of bilingualism and early language acquisition - conducted a study to discover where the difficulty stemmed from.

“We often think of English as one big language but in fact, each individual­ accent may pose different challenges for different listeners, and it can sometimes pose a challenge for infants when they're learning their first language,” she said.

“We found that babies had difficulty in distinguishing a word like "sheep" from "ship" or "she" from "shoe" before 17 months. But they had no trouble if they first learned a word with less vowel variation such as "ship" even at 15 months of age.”

A/Prof Escudero said research on the use of dynamic information in language suggested that infants' improvement at detecting variations in vowel sounds from 15 to 17 months may reflect the development of their attention to core components of vowel processing in the second year of life, which guides language learning through to adulthood.

“These findings are exciting, particularly considering that adults often struggle at learning and distinguishing differences in vowel sounds that are not present in their native language. The dynamic properties of AusE may be even more challenging,” she said.

The research findings have been published in the journal Developmental Science.(opens in a new window) This research took place at the MARCS BabyLab and was funded by the Australian Research Council’s Centre of Excellence for the Dynamics of Language.

Farah Abdurahman,(opens in a new window) Media and Communications Officer