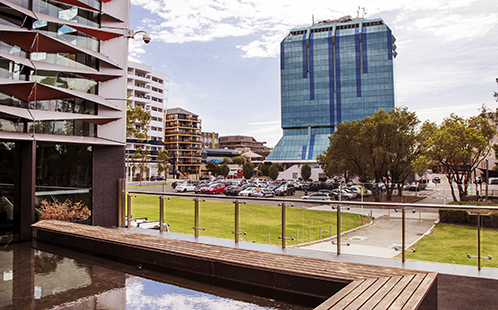 The site for a new Western Sydney University campus in the Bankstown CBD. Photo: Sally Tsoutas.

A new world-class university campus is set to be constructed in Bankstown.

The City of Canterbury Bankstown and Western Sydney University have identified a suitable location – a two-and-half-thousand square metre site in Bankstown’s CBD, between Council’s administration building and the award-winning Bankstown Library and Knowledge Centre.

Today, Mayor Khal Asfour and Vice-Chancellor, Professor Barney Glover, inspected the site, which is centrally located in the heart of the Bankstown CBD and is very close to the railway station, bus interchange, TAFE College and eateries.

“This decision is a massive win for Canterbury-Bankstown, local youth and University,” Mayor Asfour said. “In fact, it is an historic moment for us.

“The new campus will almost single-handedly transform Bankstown’s CBD, injecting tens of millions into the local economy every year, and further supports Canterbury-Bankstown’s status as an education and health precinct.

“It is about making tertiary education more accessible for our local youth and enables us to play an active role in helping them gain employment.

“Local industries will also benefit by working directly with WSU, to ensure students are ‘job-ready’ and fully trained for the roles on offer in Canterbury-Bankstown.  Graduates then have the option to continue to live locally.” 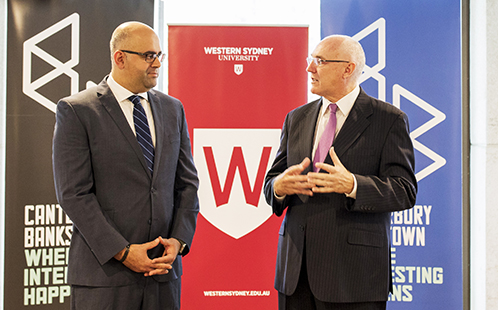 Mayor Asfour said Council and Western Sydney University will now look to enter into a Heads of Agreement, regarding the lease of the land and commercial aspects.

“It would be Council’s intention to lease the land for 99 years at peppercorn rent and, in return, receive public parking and retail and shop space as a source for rental income,” Mayor Asfour said.

It is understood, WSU will be looking to accommodate up to 7,000 students in a new facility, which would rival the size of its existing Parramatta City campus.  Under the present zoning, the identified Bankstown site can accommodate a building of up to 16 storeys, or height of 53 metres, with a floor space ratio of 4.5:1.

“This decision represents a major intensification of our long standing presence in Bankstown and Milperra” said Professor Glover.

“By developing a technology-rich, modern facility embedded in the heart of the Bankstown CBD, we are significantly improving accessibility to higher education. Western Sydney University’s teaching and research program also brings considerable economic and community benefit.

“This is about bringing world-class higher education even closer to the region and ensuring that that the benefits stay in Canterbury-Bankstown.”