Why the empty seats? Study to investigate fan experiences in stadiums 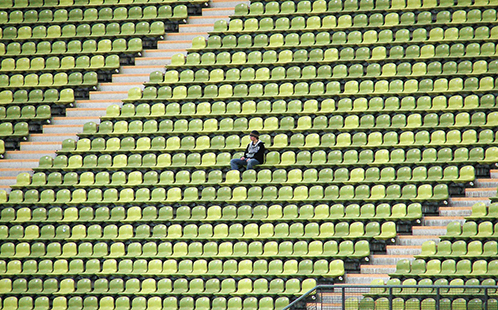 In the lead-up to the biggest event on the rugby league calendar, the NRL was accused of inflating its reported crowd numbers and giving away free tickets to the Grand Final.

It takes 80,000 to ensure a sold-out ANZ Stadium and, according to media reports, the NRL feared that it wouldn’t make up the numbers.

“In many of the big stadiums, the food can be expensive and poor quality; the cost of buying a ticket can be exorbitant; and with crowd congestion and traffic chaos, travel to and from the venue can also be difficult,” says Dr Parry.

Dr Parry says today’s fans can watch sporting matches at any time of the day or night on television, and stream sport endlessly on their mobile devices.

“Given the negative aspects of attending live matches and the unprecedented access to sport at home - it’s no wonder so many people are choosing to trade the crowds for the couch.”

In an attempt to better understand the preferences of stadium-attending Australian sports fans, Dr Parry is conducting new research with the help of fan engagement consultant and independent researcher, Blair Hughes.

Sporting fans were invited to participate in the Western Sydney University study, to share their own experiences in relation to buying tickets and travelling to the major venues.

“The experience of attending a live sporting event can begin long before a person reaches the venue. It starts with the decision to attend and includes purchasing a ticket, getting to and from the venue, and getting home again – long after the final whistle has sounded,” says Dr Parry.

This study has been approved by Western Sydney University’s Human Research Ethics Committee. The Approval number is H12376.