What does DNA sound like? Using music to unlock the secrets of genetic code

the following opinion piece by Dr Mark Temple from the School of Science and Health, was first published (opens in a new window) in the Conversation. 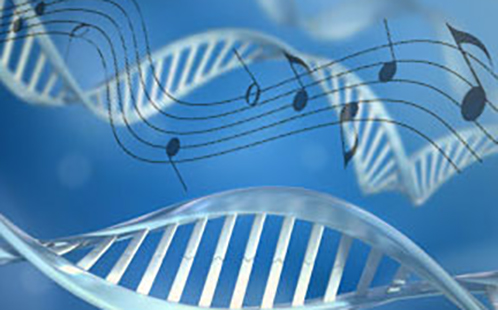 I've been studying molecular biology for many years. I also have a keen interest in music, having played with Sydney pop band the Hummingbirds. Usually, there is little overlap between these two pursuits, but I recently became aware of people using DNA sequences to create music.

This is called sonification. The people doing this usually treat DNA sequences as random patterns to create nice-sounding music. But what if we used musical notes to find out something useful about DNA sequences, like where mutations occur?

So I put on my coding hat and devised a tool that converts a DNA sequence into an audio stream. The results were recently published in the journal BMC Bioinformatics.

DNA acts as a template for the production of proteins in our bodies. A DNA sequence is a long, continuous chain made up of only four chemical bases referred to as G, A, T, or C. They repeat in various defined patterns to make up a gene. Many genes are identical in sequence within a species; that is, from person to person, or from virus to virus.

But sometimes one of the chemical bases in sequence is different from the usual pattern – this is called a mutation, and it can indicate an error that could create problems for the person or microorganism involved.

In my online audio tool, any changes in a repetitive DNA sequence due to mutation give rise to a very distinctive change in sound.

To give you an idea of what I'm talking about, here's an artificial test DNA sequence in my online audio tool that consists of a series of Gs.

In real life, of course, DNA sequences are more complex than that. For starters, real DNA sequences include codons. A codon is a sequence of three bases which join up to create a unit of DNA information. One codon directs one building block known as an "amino-acid" in a protein. In nature, special codons mark the start and stop points of genes. In my approach, these special codons are used to start and stop the audio.

It is not intended that you can hear a note and relate it to a particular codon, however the landscape of the audio is characteristic of the underlying sequence (as you can hear in the examples).

So, how's all this sound when you apply my sonification system to a real piece of DNA that makes a protein?

Take, for example, a human DNA sequence that codes for a protein (for the experts in the audience, its the RAS protein that is often involved in cancer). Here's how it would look when expressed traditionally in written form: 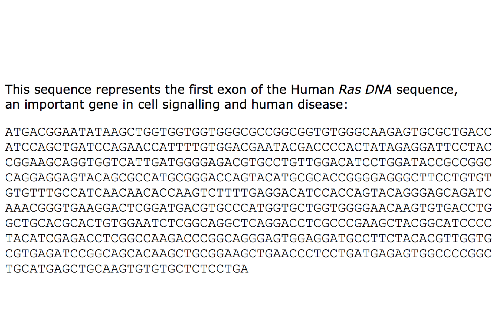 The coding sequence (opens in a new window) always has one instrument playing (the one that actually codes for the protein).

Lastly, when I "sonified" some sequences that encode for important RNA components of cells (not proteins), you can hear periods of silence in the audio – often interspersed with percussion sounds so you can hear spots where there are stop codons.

Outside of the rigours of DNA research there is strong interest within the community to better understand how DNA sequences determine our physical form and how mutations we accumulate in DNA over time affect our health.