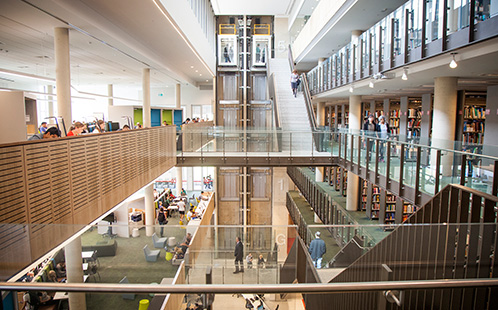 The award, presented by the Australian Library and Information Association (opens in a new window) in partnership with the Australian Public Library Alliance and Council of Australian University Librarians, showcases the best in contemporary library interiors and exteriors in Australia, taking into account the design, strategic relevance and impact of the building.

The $30 million John Phillips Library was selected for its functionality and user experience, as well as innovation and sustainability.

Opened in 2015 and named after the University's former Chancellor, Mr John Phillips AO, the Library has quickly become the focal point of the campus, boasting 6,700 square metres of user-friendly, student-centred space, fitting for a 21st century university.

Its six- storey design incorporates an integrated approach to learning with group study rooms and collaborative learning spaces fitted with the latest Wi-Fi and AV technologies. A ground floor café and informal meeting spaces bring people together, providing a hub for gatherings.

As one of 33 nominations from across Australia, the John Phillips Library was a clear stand out among inspirational and achievable examples of modern designs for school, public, academic and special libraries.

The prestigious award not only recognises the investment in libraries made by our nation's institutions, corporations, local, state and territory governments, but also Western Sydney University's commitment to providing quality learning environments for its students and staff.