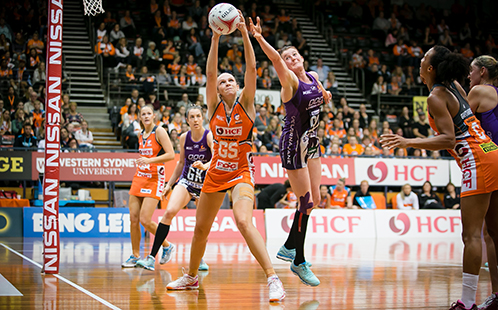 The sponsorship will see Netball NSW, who owns and manages GIANTS Netball, and the University team up for the next three seasons to 2019.

Western Sydney University is the only partner to have a presence across all three GIANTS teams – AFL, AFLW and Netball. The University and Netball NSW will work together on a wide range of initiatives across the areas of education, health and community, including the development of a 'Women in Sport' event and internship programs for students.

Vice-Chancellor Professor Barney Glover says the exciting relationship provides benefit to both partners, with the popularity of netball and women's sport at an all-time high.

"Partnerships such as these are about promoting the value of both education and a healthy lifestyle in our community.

"We are also giving our students and staff a chance to connect with elite sporting organisations to research and obtain industry experience, and providing these athletes the opportunity to further their higher education – either while they are playing, or following retirement from their sporting career."