When Jessica Cortis reflects on the kind of journalist she wants to become, she is taken back to the streets of Nepal – to one fleeting moment, one chance encounter.

Jessica was completing a five-week stint as a student intern at the Nepali Times in 2016, and was sent to report on a local zoo that was being relocated. She was walking through the ancient streets of Patan when a young boy started to follow her.

"The child must have only been about five-years-old. He was running alongside me, tugging at my shirt, and seemed to be pleading for something. He was holding a sheet of paper, but the writing was in Nepalese. I couldn't understand what he wanted from me," says Jessica.

"I eventually managed to shake him off and, when I looked back down the street, I saw him standing with two women. The moment impacted on me at the time, but it wasn't until later that the penny dropped and I realised – the boy was an orphan, and he was begging for money."

Jessica, a Bachelor of Communication (Dean's Scholar) student at Western Sydney University, has been named as a finalist in The Walkley 'Student Journalist of the Year Award'.(opens in a new window)

Jessica says her internship in Nepal proved to be a cultural awakening, and an incredible learning experience – it also provided a wealth of compelling stories that helped her to become a Walkley Award contender. "I was investigating another story, about a Mobility Agreement that Western Sydney University was signing with Kathmandu University. It was at the signing event that I happened to meet the Australian Ambassador for Nepal," says Jessica.

"We got talking and he told me about 'Forget Me Not' – an Australian non-government organisation that unwittingly became embroiled in an illegitimate orphanage scandal in Nepal.

"The Australian founder, Andrea Nave, genuinely wanted to help the orphans in Nepal. She thought her organisation was helping to fund and run an orphanage – but it was all a scam. The children weren't orphans at all. They were recruited from decrepit villages and false documents were created to give the illusion they were parentless."

Jessica says she was deeply touched by the story. She kept thinking about the parents who gave up their children in the hope that they would have a better future – only for those children to be used as mules to entice donations from volunteers, sponsors and tourists.

At the time of learning about the Forget Me Not scandal, Jessica was coming to the end of her internship and was just about to begin her trip back to Australia – but the vision of that little boy begging on the street stayed with her.

"My head was swirling – I realised that, if I was going to become a journalist, this was the kind of stuff that I needed to write about. I needed to write the story so that I could bring this important issue to light and impact change." 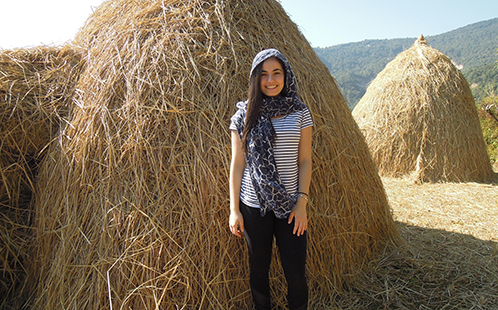 Jessica returned to Australia and sought the advice of her journalism lecturer Dr Asha Chand, who encouraged her to follow the lead and write the story as part of a Feature Writing component of her degree.

The resulting investigative feature, simply titled Forget Me Not,(opens in a new window) is just one of a body of works that struck a chord with the public and with The Walkley Foundation.

Also submitted as part of her nomination for The Walkley Award are two stories that Jessica was assigned to cover at the Nepali Times:

"A week after her story was nominated for the awards; The Conversation published a story on the Modern Slavery Act being considered by the Australian government. Jessica had covered this in her feature. We are thrilled that Jessica has written a story that makes such a difference to our society."

The Walkley Awards are considered the pinnacle of achievement for any Australian journalist.

The 'Student Journalist of the Year' award is open to undergraduate and postgraduate students. The award winner and finalists are chosen on the basis of journalistic excellence, including newsworthiness, research, writing, production, incisiveness, impact, ethics, originality, innovation and creative flair.

The overall winners will be announced at the Mid Year Awards Ceremony in Sydney, on Wednesday 26 July 2017.