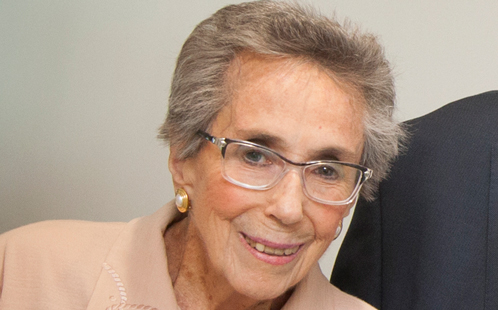 It is with sadness that the University acknowledges the passing of Mrs Moya Phillips.

Moya was the wife of the late Mr John Phillips, who served as Western Sydney University's second Chancellor from 2001 until his retirement in 2010.

She was a much loved and highly regarded member of the University family; well known to many of us, having attended a great number of University functions over the years, including graduation.

Moya was a tremendous supporter of this University and its mission, and played an important role in the University's history during a time of great change and development. She equally shared John's commitment to the value and transformative power of higher education.

In 2011, the University was pleased to establish the John and Moya Phillips PhD Scholarship in Macroeconomics, to provide support to PhD candidates pursuing research in the area of macroeconomics or public policy.

Moya continued to be a wonderful friend of Western Sydney University long after John's retirement as Chancellor. She returned to the University in April 2015 as a guest of honour at the opening of the newly-built library at Kingswood, which was officially named the 'John Phillips Library' in tribute to her husband.

Moya Phillips will be greatly missed. On behalf of the Board of Trustees and the broader University community I extend our sincerest condolences to Moya's children, Anne and Mark, and the entire Phillips' family.