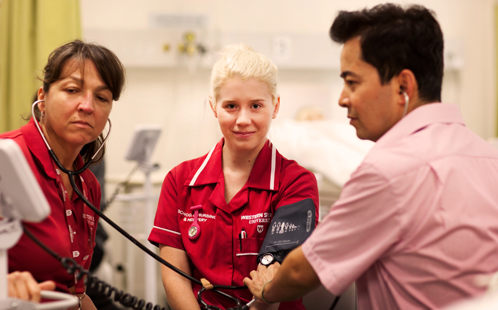 Western Sydney University's standing as a global leader in the fields of nursing and midwifery has been reinforced, with the release of a new ranking system that places the University first in Australia and fourth in the world.

The Center for World University Rankings (CWUR) has published its inaugural Rankings by Subject 2017 (opens in a new window) – which compares the research publications of more than 26,000 higher education institutions worldwide.

Nursing and midwifery at Western Sydney University was awarded a score of 91.12, which secured the prestigious 'Top 10' ranking – the highest of any Australian institution.

Associate Professor Deborah Hatcher, Dean of the School of Nursing and Midwifery, says Western Sydney University is internationally renowned as a major educator of health professionals. "The University is home to one of Australia's largest nursing Schools, and has a reputation for producing high-quality nursing and midwifery graduates," says Associate Professor Hatcher.

"This latest ranking reflects the strong research output of nursing and midwifery academics, and is a welcome addition to the University's growing list of international accolades."

The CWUR ranking is based on the number of research articles the University has published in top-tier journals.

Western Sydney University is also ranked in the top 100 universities in the world for nursing, in the QS World University Rankings by Subject.