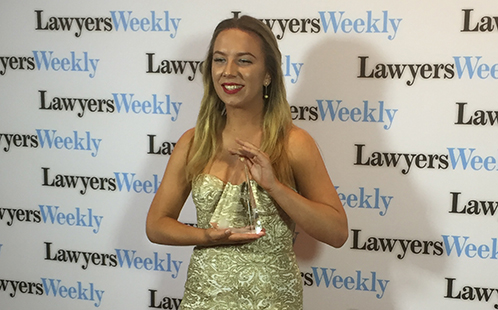 Marija was announced as the overall winner of the coveted prize at the Lawyers Weekly 2017 Women in Law Awards in Melbourne, after being shortlisted alongside ten of the country’s top law students.

Marija is 22-years-old, and is in the fifth year of her Bachelor of International Studies/ Bachelor of Laws degree at Western Sydney University.

The former Xavier College student from Llandilo is a member of the University’s The Academy program, and is currently completing her Practical Legal Placement at the Western Sydney Community Legal Centre.

“I believe the key to a successful career is the opportunity to be challenged, and to fail,” says Marija.

“A career is about growth, and for me, I want to impact lives and drive innovation. The law is both a shield and a sword, and I intend to continue to learn, apply and change the law so that it may continue to serve and protect.”

In the judging of the highly competitive ‘Law Student of the Year’ category, Marija was recognised for her extensive community work as well as her role in enhancing the community’s understanding of the legal profession as the founder of the student club, Dare to Know Publications.

Sapere Aude – which is loosely translated as ‘dare to know’ in Latin – distributes 6000 copies each year and hosts annual community events to discuss issues such as mental health and cultural diversity. Bitesize Law aims to break down complex legal concepts for students and members of the community.

Marija was elected to join the University Student Council in 2014, and in 2016 worked as a ‘Respect.Now.Always’ ambassador to educate students about safe sex, healthy relationships and sexual assault. She is also a member of the NSW Young Lawyers International Law and Human Rights Committee, and the Environment and Planning Committee. 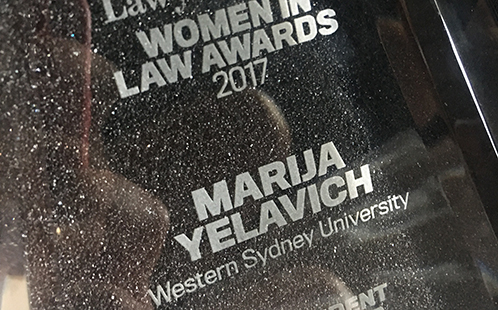 In 2015, Marija completed a semester exchange at Aarhus University, Denmark, and in 2016 competed at the International Nuremberg Moot Court Competition.

At her placement at the Western Sydney Community Legal Centre, Marija’s role at the front desk is to take enquiries from clients, make an assessment of the legal issues that they present, and assign each case to a lawyer. She also acts as a translator for Croatian people.

Every Friday, Marija also volunteers at the Mount Druitt Ethnic Communities Agency – where she is a mentor for local high school students, many of whom are from refugee and migrant backgrounds.

“Recently, I met a young female refugee – she ran up to me and said, ‘I heard you are a lawyer. I want to be a lawyer.’ This student is now my mentee, and for two hours each week I meet with her at her school. This ability to practically help someone, to guide and support young minds, is why I am passionate about pursuing a career in law,” says Marija.

“While I am not quite sure what the future holds for me, I am sure that my passion will promise me a fulfilling career where I am able to thrive and lead change that will benefit my clients and the wider community. Each day brings a new opportunity to learn and this is my passion.”

Professor Steven Freeland, Dean of the School of Law, congratulates Marija Yelavich on her fantastic achievement.

“Marija has been recognised for her contributions to the legal profession and the broader community, which are note-worthy and admirable.”

“Marija is an outstanding student and a great ambassador for Western Sydney University. She has a bright future ahead of her.”

When Marija received her award, the voice over announced: “Judges were impressed by the time management, and energy of this winner. They found her talent and commitment to using her skills to help a broad range of people humbling.”

One of the judges also said the following comment: "Marija is an outstanding example of making 24 hours in a day seem like 50. Her energy and commitment to using her talents to help the widest number of people possible is truly humbling."

Fellow Western Sydney University student, Alex Armstrong-Millar, was also a finalist for the Law Student of the Year award. Alex was recognised for her work as a Law Clerk in Telstra’s Retail, Marketing and Media legal team.