Excitement is building for the Western Sydney University Solar Car Project. The team has released a teaser trailer video for its sleek, new solar-powered vehicle that will compete in the 2017 Bridgestone World Solar Challenge (opens in a new window) in October.

The video, released this week on social media, reveals a blackened silhouette of the solar car – concealed in the shadow of a bright, neon Western Sydney University shield.

AJ Verma from the School of Computing, Engineering and Mathematics (SCEM) says the teaser trailer is deliberately vague in its presentation of the as-yet-unnamed vehicle – the details of which are being kept under wraps until its official launch in August.

"We don't want to reveal any specific details of the car just yet – as we don't want to give our competition any advantage. But rest assured that this year we have refined every minor detail of the car and it will be our best yet," says AJ.

AJ, a Bachelor of Engineering graduate, led the Solar Car Project in 2015 and is now a SCEM staff member supporting the 2017 team. He says the team are in a race against time to finish building the solar car and get it to Darwin.

"We used the massive industrial ovens at Innovation Composites (opens in a new window) to dry and set the car's carbon fibre body. The team travelled to Nowra this week to fit the wheels and suspension to the vehicle, so that its transportation to our Penrith campus lab would run as smoothly as possible," says AJ.

"We have just shy of 80 days, and in that time the Solar Car Team will be working round the clock, sleeping in the lab and working in shifts to get the vehicle ready." 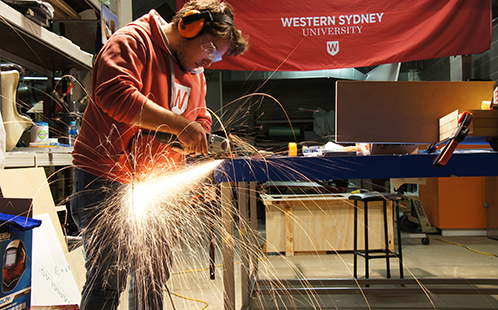 2017 marks the third time that Western Sydney University have participated in the biannual Challenge – which involves a 3,000km drive from Darwin to Adelaide using only solar power.

In 2013, Western Sydney's inaugural year, challenging weather conditions and mechanical issues led to the original vehicle, 'SolAce,' being towed for a short time on the road to Adelaide. Despite these trials, the team finished in the top half of their class.

In 2015, the team ramped up their efforts and their increasing skill and confidence was evident in the design of its second vehicle. 'UNLIMITED' crashed after a suspension failure but was speedily repaired and crossed the finishing line in tenth place out of 43 teams out on the field.

In 2017, the team is a more experience, professional unit. AJ says the team is in a very competitive position, and is very positive about their chances this year. 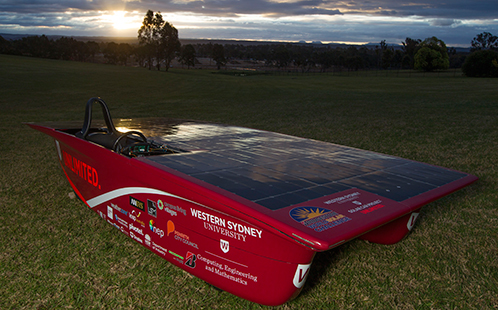 "In each outing, the car has evolved. This time, we've worked to improve every aspect at a fundamental level to create a more cohesive package – every detail counts, every single gram, and the result will be the most efficient car we've ever made."

The 22 member Solar Car team is comprised of Western Sydney University students from the fields of Engineering, Industrial Design and Visual Communications. The students manage every aspect of the production and design of the vehicle, as well as sponsorship, marketing and the administrative elements of their involvement in the Challenge.

Max Mammone, a Bachelor of Engineering student, is a first-time member of the Solar Car Project in 2017. As part of the mechanical team, Max has been involved in the design and manufacture of the rear suspension and brake systems for the vehicle.

Max is a highly dedicated member of the team, who spends 6-7 days each week at the Solar Car Lab at the Penrith campus. Max says being part of the team is a huge commitment – but one that is having a positive impact on his studies.

"The Engineering degree is definitely challenging, but I find that – being involved in the Solar Project – the work becomes easier," says Max.

"I'm finding that the practical experience of working on the solar car directly correlate with the theoretical elements of my studies. The Solar Car team has first years to fourth years, all working together and sharing their expertise – it's practical, hands-on learning that allows us to re-learn our course material."