The origins of baby talk: How Infant Directed Speech shapes your child’s development 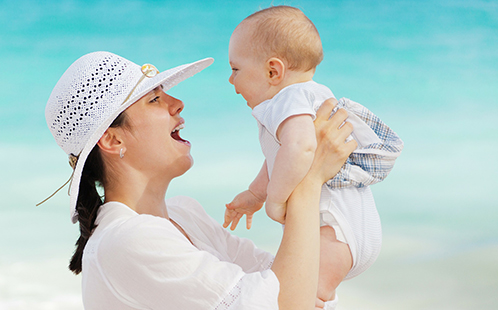 The way you speak to your baby can tell a very specific story.

Through the subconscious mechanism of babytalk, a parent's voice can offer encouragement, discipline or comfort, and according to new research findings, it can even facilitate early language development in infants.

A research paper published by the MARCS Institute (opens in a new window) at Western Sydney University shows that mothers unconsciously shorten their vocal tract when speaking to their babies, creating a higher pitch that is thought to have evolved from pre-speech, primate ancestors to provide comfort and appear less threatening to offspring.

Research leader Dr Marina Kalashnikova suggests that it was only once human language emerged, that babytalk, formally referred to as Infant Directed Speech (IDS), acquired a second purpose – to facilitate language learning in infants.

"Infant Directed Speech is actually a powerful tool that parents instinctively use to aid language development in their infant's first months and years of life," says Dr Kalashnikova.

"Shortening of the vocal tract is not unique to humans – it is an adjustment that several species make to appear smaller and less threatening.

"Mothers' speech also sounds more similar to an infants' own vocalization and this has been proposed to drive their preference for IDS; further, infants prefer to listen to speech that is similar to the sounds that they produce."

Dr Chris Carignan, who ran the experiment, says this was the first study of its kind to not only measure the sound qualities of the speech that mothers produced when speaking to their infants, but also measured the movements that they made when producing speech.

"We assessed the movements of their lips and tongue using an Electromagnetic Articulography (EMA) machine to determine if this was an issue of hyper acoustics or hyper articulation," says Dr Carignan.

"Electromagnetic sensors were attached to the tongue and lips of our participants using temporary dental adhesive. Through this technique, we were able to calculate the position of the sensors, and track the movement of the locations of the vocal tract where the sensors were placed.

"Although we were all very pleased with the result, it was not the outcome that we expected.

"We initially predicted that mothers would change the shape of their vocal tract, instead, we found that they changed the length but not the shape."

This research was conducted in partnership by Dr Marina Kalashnikova, Dr Chris Carignan and Professor Denis Burnham from the MARCS BabyLab.

This paper, The origins of babytalk: smiling, teaching or social convergence, has been published in Royal Society Open Science.(opens in a new window)