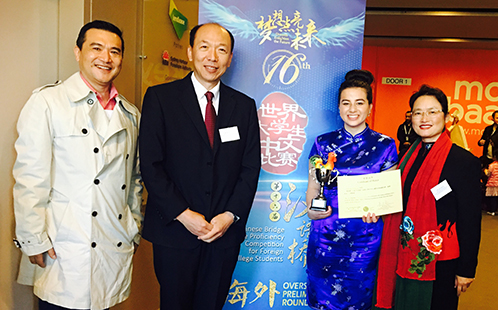 Jenny McElroy never thought she would be learning Chinese as a sub-major to her Bachelor of Business degree at Western Sydney University, but after placing second in the annual Chinese Language Bridge competition, she's glad she did.

In just her second year of Chinese Language Study, offered by the School of Humanities and Communication Arts, the 19-year-old competed against 12 non-Chinese University contestants from across Australia in a variety of categories of Mandarin including Chinese speech and Chinese cultural arts performance.

Jenny McElroy says she was never interested in learning Chinese as a child, much to her mother's dismay.

"I was enrolled in Saturday Chinese classes at Granville Girls High School and then later at Blacktown Girls High School. But as I got older, I would tell my mother I felt sick or find another excuse to get out of attending," says the Blacktown resident.

"I had no interest in learning the language and it wasn't until the Spring Session of 2016 that I made an effort to learn, thanks to our passionate WSU Chinese teachers and the incredible Chinese courses. I had a great experience of learning Chinese at WSU."

Jenny's result means Western Sydney University students continue to shine in the large-scale international contest, placing in the top two for nine years in a row. Sponsored by the Office of the Chinese Language Council International in Beijing, the contest has seen over 600,000 students from 110 countries participate in the competition, with 2017 marking its sixteenth year running.

Associate Professor Ruying Qi, Chinese Major Area Convener and Director of the Bilingualism Research Lab, is one of the many teachers who inspired Jenny to pursue her Chinese language studies.

She says the University's consecutive success can be attributed to the outstanding teaching of the Chinese teaching team, and its sustained excellence in the development of innovative Chinese and bilingualism programs in the School of Humanities and Communication Arts.

"The competition was very intense. Jenny is our second year of Chinese language student and she started learning Mandarin Chinese with WSU right from scratch while most of the other contestants have an in-country China study experience," says Associate Professor Qi.

"It is my great pleasure to see students like Jenny progress remarkably well with our Chinese-Made-Easy program."

Associate Professor Qi says she's impressed by Jenny's resilience and persistence in practicing Chinese inside and outside the classroom, as well as her determination to get the Chinese tone and pronunciation right.

"Her efforts are paid off at the competition: Jenny's fluent delivery of Chinese four-tones tongue twisters and her native-like pronunciation blended with a sense of humor stood her out from other contestants," she says.

Associate Professor Qi says Jenny impressed the judges with her humorous and touching speech about her Chinese learning experience, and also captured the audience with a complex cultural performance that incorporated traditional Chinese painting and singing.

After she mastered the tongue twisters and challenging words in her speech, Jenny hopes to develop her conversation skills while in China as it will give her an opportunity to speak with the locals.

"Now that I'm older I can see a rising tourism industry with many Chinese people coming to Australia so I think it is advantageous that I learn it," the Business student says.

Jenny also received a Chinese government scholarship to study Chinese language and culture for one year in a China's top university of her choice.

Associate Professor Qi says Jenny and the university's other achievements at the competition have been made possible thanks to the dedicated Chinese teachers: Xiang Chen, Linda Gu, Chong Han, Leesing Lau, Wanhua Wu and Lijiang Zhao.

"Lijiang Zhao deserves particular mention for his close mentorship of the students especially over the month preceding the competition," says Associate Professor Qi.

Professor Peter Hutchings, Dean of School of Humanities and Communication Arts, congratulated Jenny for her achievements.

"This incredible result together with the past nine years of successes in the global Chinese language competition reflects the strengths of our Chinese Teaching team and leadership of our Chinese and other teaching programs in collaboration with other disciplinary areas and local and international communities," says Professor Hutchings.

"Jenny and other student consistent successes are testimony to our mission to secure success for our students and the Greater Western Sydney region. The University and the School are committed to empowering students to succeed globally."