The following opinion piece features a contribution by Alexandra Wong from the Institute of Culture and Society was first published (opens in a new window) in The Conversation.

The federal budget was the government's latest attempt at navigating a policy solution that supports its pro-foreign investment position while responding to public concern about housing affordability in Australian cities.

China's government is also searching for a policy solution to restrict the large amount of capital that's flowing out of the country. But the Chinese crackdown "doesn't appear to be working".

We surveyed almost 900 Sydneysiders to investigate their views on foreign real estate investment. The effectiveness of government regulations on foreign investment and investors was a major concern for respondents.

The survey obtained the views of people aged over 18 living in the Greater Sydney region. They were asked about housing affordability, foreign investment, the drivers of Sydney housing prices, and perceptions of Chinese investors specifically.

Support for the government's regulation of foreign investment in housing was weak. Only 17% of respondents thought it was effective.

Almost 56% of participants believed foreign investors should not be allowed to buy residential real estate in Sydney. Only 18% believed this should be permitted.

These views stand in stark contrast to the government's geopolitical support for foreign investment in Australia.

There is little fine-grained data about the impacts of foreign capital and investors on specific neighbourhoods and developments in Australian cities. Therefore, we did not set out to compare public attitudes against the limited empirical evidence on the effects of foreign real estate investment in Sydney.

Around 63% of Sydneysiders identified the Chinese as the heavyweights of foreign investment. This is likely to be accurate, given the concentration of Chinese investment in Sydney and Melbourne.

When presented with the statement "I welcome Chinese foreign investors buying properties in my suburb", more than 48% of participants disagreed.

Other studies, however, have shown the potential for public confusion between domestic Australian-Chinese and international Chinese buyers.

Views on the drivers of housing prices

Respondents were asked to choose up to three drivers of house prices based on their understanding of Sydney's housing market. By far the most commonly nominated driver of house prices (64% of respondents) was foreign investors buying housing. 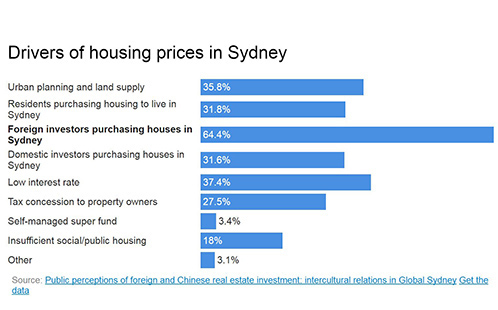 Roughly one in three survey participants saw low interest rates (37% of respondents) and domestic home owners (32%) and investors (32%) as the drivers of higher housing prices. Local housing analysts generally agree with this.

But more than three in four participants (78%) agreed with the statement:

Views on housing supply and affordability

We expected people to report that foreign people and capital are driving up housing prices and making it more difficult for Australians to compete in the housing market. But we were surprised by the findings about Sydneysiders' views on foreign capital and housing supply.

A strong message from the real estate and property development industries is that foreign investment increases housing supply, which in turn puts downward pressure on prices.

Politicians and lobby groups argue this will help improve housing affordability in major Australian cities. But many housing analysts argue that this supply solution does not stack up for purchases made by either foreign or domestic investors.
It seems that Sydneysiders don't accept the real estate industry message about foreign investors increasing housing supply, and therefore helping to ease housing affordability pressures.

When asked if "Foreign investment can help increase housing supply in greater Sydney", 48% of participants disagreed with the statement. Another 25% "neither disagreed or agreed".

The government's dilemma is how to manage foreign investment alongside an increasing housing affordability problem in major Australian cities.

Our survey results support other studies that suggest this pro-foreign investment stance must be accompanied by strategies to protect intercultural community relations. This must happen alongside efforts to improve housing affordability.