Success of ‘The Shed’ leads to 2017 Aboriginal Justice Award 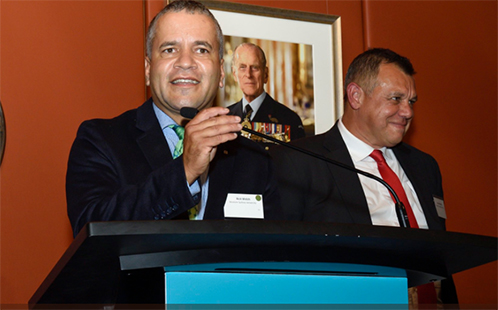 Rick Welsh, a Project Officer from the School of Science and Health at Western Sydney University, has been presented the 2017 Aboriginal Justice Award from the NSW Law Foundation.

Mr Welsh is the coordinator of ‘The Shed’ – a drop-in and referral centre in Western Sydney, which provides support for Aboriginal men who are experiencing problems with the justice system. The Shed also tackles health issues or family problems and runs a suicide prevention program.

The Justice Awards were held on Thursday 19 October 2017 at NSW Parliament House. The Aboriginal Justice Award, sponsored by the Department of Justice NSW, was presented to Rick Welsh by Tony McAvoy SC.

The Shed was established in 2004 as a partnership between the University’s Men’s Health Information & Resource Centre and Holy Family Church at Mt Druitt and has since been run by Aboriginal men, with the support of elders.

Rick Welsh came on board as the coordinator of The Shed eight years ago, following roles in the Aboriginal and Torres Strait Islander Commission and the Men’s Health Information & Resource Centre.

Alongside his role at the shed, Mr Welsh sits on the NSW Law Society’s Indigenous Issues Committee and the Federal Circuit Court’s Access to Justice Committee.